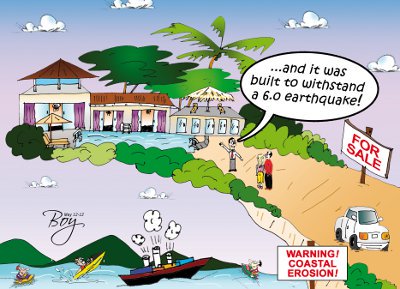 PHUKET: Funding for projects to “combat” erosion along the Andaman coast through construction of seawalls, jetties and similar structures would be better deployed on environmentally-sound projects like sand-dune stabilization, mangrove reforestation and enforcement of laws that regulate shoreline construction.

Trying to conquer the forces of time and tide is the quintessential exercise in futility. This is especially true along Phuket’s western coastline, with its strong southwest monsoon season currents and pounding wave action.

A child building a sandcastle on a beach quickly learns a lesson that seems to elude many government officials. Even a sea turtle, with a brain commensurate with the size of its head, knows it needs to get well above the high-tide mark to safely lay its eggs.

Yet here in Phuket, we continue to see one money-wasting project after another built too close to shore. Crumbling seawalls create an eyesore and are a public danger along many popular tourist beaches. The politicians who authorize spending for these projects are apparently less concerned with the long-term prospects of containing the sea than the immediate short-term benefits to certain individuals.

A 17-million-baht seawall built to protect the sea gypsy community at Laem Tukkae on Koh Sireh in Rassada didn’t last a single monsoon season, yet officials there are already planning a replacement structure that will cost about twice as much. Let’s hope the sea gypsies pass on some of their knowledge about the sea to the academics and politicians during the public-hearing process.

Perhaps the best example of our inability to accept the power of sea currents is the ill-fated Coral Reef Squadron, a collection of decommissioned aircraft sunk in Bang Tao Bay a few years ago to serve as a recreational dive site.

Despite being chained to huge concrete blocks, the sunken aircraft were quickly swept away during their first monsoon season. Bits of their remains have reportedly been spotted as far north as Ranong.

Our elected leaders persist in a fallacious, tin-mining-era mentality insofar as the sea is concerned. A well-known local politician has even suggested that the runway at Phuket International Airport be extended out into the often pounding sea off Mai Khao Beach so that larger aircraft could land there. Good grief.

Whether one accepts or rejects the idea that mankind’s activities are responsible for the current rise in sea levels across the planet, the fact that they are rising is not in dispute. We need to accept this reality and give the sea the due respect that our ancestors did.

We should enjoy the coastline for what it is, an ever-changing interface between land and sea – not a battleground in a Man against Nature war.