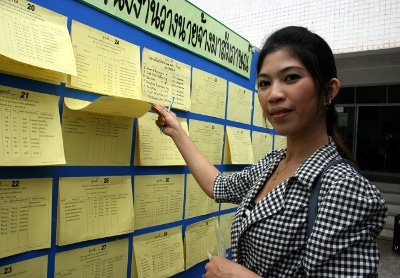 Representatives from more than 59 businesses turned up at the Phuket Software Industry Promotion Agency building at Saphan Hin to offer in total more than 1,500 jobs.

Most of the positions on offer were in Phuket’s critical hotel and tourism industry. Among the other positions were sales representatives, customer service staff, restaurant cashiers, hospital workers, real estate agents and spa staff.

However, the opportunity to find work in such a variety of workplaces was not enough to draw applicants in large numbers.

“It was really quiet today. This morning only 100 people came to apply for jobs,” said PPEO officer Phuang Songnam.

“We advertised this job fair through many media. We also sent SMS messages direct to those who registered with the PPEO as being unemployed,” he said.

Mr Phuang attributed the small turnout to a combination of local residents already being employed or already having their own business, compounded by job-seekers in other provinces being dissuaded from coming to Phuket because of the high cost of living.

“Although salaries [in Phuket] may seem higher than in other provinces, the cost of living here is quite high. Even a bowl of noodles can cost 45 baht here,” Mr Phuang added.

Of the job hunters who did turn up, many were fresh graduates.

Mariya Wangphon came from her home province of Krabi. “I studied here in Phuket and want to get a good job here. I got my degree in business administration and there are not that many jobs on offer in Krabi,” Mariya said.

“I worked in a beauty clinic before, but the money was not good. I want to get a better job in order to survive and have some money to save,” she added.

Chanida Heaman, from Songkhla, used to be a government officer.

“But the money was not that good, that is why I came here to look for a new job. I heard about the job fair from my friend who registered as being unemployed. We came together to see if there were any good jobs on offer,” she told the Gazette.

“Our company is now looking for employees for more than 85 positions, but so far only three of those positions have been filled,” said Aree Khunchit, manager of the True Move branch in Phuket.

“We have also advertised our vacancies through the university information center and many people have applied because we offer good benefits to all of our employees, but not many people have showed up here today,” she said.

“We currently have more than 3,000 positions available on our register. We will continue having job fairs in order to solve this problem as soon as possible,” he said.

“We usually hold one big job fair and about nine small job fairs in Phuket each year. We also try to recruit employees from other provinces, especially from the northeast, but not many people apply for work in Phuket.

“They realize that the cost of living here is high, and some of them are still scared of the tsunami that happened years ago,” Mr Noppadol added.