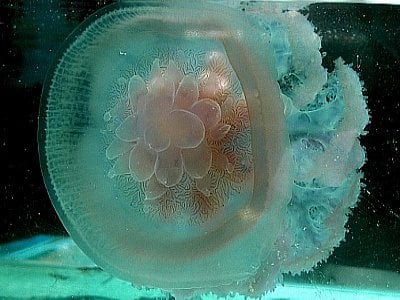 PHUKET: Local hospital staff and experts at the Phuket Marine Biological Center (PMBC) are confounded by the story of a British woman, reported in sensational fashion yesterday, as suffering extreme injuries in a jellyfish attack “somewhere near Phuket”.

Although the story, published by the Daily Mail in the UK, showed that British mum Sam Webster, 37, clearly suffered serious injuries, the report did not specify where the jellyfish “attack” occurred.

However, it says that the family’s tour operator “arranged a transfer to a bigger private hospital in Phuket” that required a six-hour ambulance journey.

Hoping to clarify where the danger lies, so that other tourists could be spared the agony that Mrs Webster endured, the Phuket Gazette contacted the major private hospitals on the island.

They told the Gazette that they had no record of treating a “Sam Webster”.

Staff at Mission Phuket Hospital confirmed they did have a “Webster” in their system, but that person was a male foreigner with the first name Mathew – and he was not admitted for the treatment of jellyfish lacerations.

Staff at Krabi Hospital also confirmed they had no record of treating any person with the family name “Webster”.

“Actually, we have had no reports of any serious jellyfish stings at all,” the staffer said.

“Of course, we will be informed if it is an important case and there is something we may be able to help with,” he added.

Mr Ukkrit explained that box jellyfish may be found along the Andaman coast, including Phuket, Krabi and Phang Nga, but only on rare occasions.

However, he did warn that other forms of less dangerous jellyfish, that could still inflict serious burns, are found all along the Andaman coast.

“I cannot specify in which areas jellyfish can be found because they travel with the current, so they can be found anywhere in coastal waters. They can easily be found in areas where brackish water meets seawater, but they tend to be seen near the shore only during the rainy season [May to October],” he said.

Mr Ukkrit explained that tourists were more frequently encountering jellyfish because more tourists were now swimming in Phuket during the rainy season, when jellyfish numbers are higher.

“We are working together with Department of Disease Control, under the Ministry of Public Health, to post signs warning people that jellyfish can be found in the waters around Phuket, and to explain how to provide initial treatment if stung by a jellyfish. We will post the signs in tourist areas around Phuket ‘soon’,” said Mr Ukkrit.

“We will also attach baskets with a bottle of vinegar to the sign, so that when anyone does get stung, they can pour the vinegar onto the affected area. This prevents any undischarged stinging cells on the tentacles from firing more venom into the victim. However, this is only an immediate first aid measure, as the person will need to be taken to hospital for proper treatment,” he added.

Mr Ukkrit suggested that anyone wanting to swim off Phuket during the rainy season and stay safe from jellyfish stings should wear clothing while in the water, as many local Thais do.

Regarding the new species of box jellyfish found in fish traps off Phuket in 2008, Mr Ukkrit explained that more research is being done to learn about the species.

At the time, PMBC staff contacted Australian experts to work together on the research, as marine biologists could not even confirm the level of toxicity of the stings delivered by the new species.

“Right now, we still do not have enough information about the new species, but if we find they are dangerous, we will certainly warn the public,” Mr Ukkrit assured.