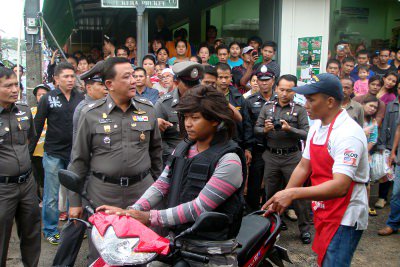 PHUKET: A crowd of onlookers at the re-enactment of the robbery of Yong Chuan gold shop in Rassada shouted disparaging remarks and denounced the prime suspect as he retraced his getaway from the Karn Keha Housing estate yesterday.

“You have shamed our community” and “We’re glad you finally surrendered,” were shouted at the suspect, named by police only as “Koson”.

Following his confession to police for the robbery, Mr Koson showed Phuket Provincial Police commander Chonasit Wattanavrangkul and Phuket City Police Superintendent Sermphan Sirikong, among other officers, how he pulled up outside the gold shop with his accomplice, “Mek”.

Mr Koson showed how he followed Mr Mek into the shop and pointed an air pistol at the 64-year-old shop owner Sirinan Sirikolworakul and said, “This is a robbery.”

Mr Mek then smashed the display counters with a hammer and snatched handfuls of gold necklaces and bracelets and stuffed them into the pockets of an apron he was wearing.

The pair exited the gold shop and sped off to the nearby Sin Paiboonchai fish processing plant with Mr Koson driving.

The pair pulled into the fish plant parking lot and changed clothes before running off to a nearby motorbike taxi rank, leaving the air gun, apron and their robbery wardrobe behind.

The pair divided the loot before jumping on taxi motorbikes and splitting up, Mr Koson said.

Maj Gen Chonasit said that police had received information of Mr Mek’s whereabouts and were close to making an arrest.

He also said that Mr Mek had attempted to rob the same gold shop before, citing that Ms Sirinan had told officers that he had used an electroshock weapon to carry out the robbery.

“Meanwhile, gold shop owners must improve the security systems at their stores. Phuket Police earlier this year called in gold shop owners in Phuket and suggested that they install smash-proof display counters so that jewelry could not be stolen this way,” he added

Case investigator Lt Col Prawit Engchua of Phuket City Police confirmed to the Phuket Gazette that the gold stolen from the Yong Chuan shop was insured.

However, he added that an accurate value of items stolen has yet to be confirmed by the shop owner.

So far reported estimates have ranged from 2.9 to 3.9 million baht.

“They are still conducting a full inventory check to determine exactly which items are missing,”

The stolen necklaces recovered in the arrest of Mr Koson’s wife, Moe Moe San, aka “Mooza”, in Bangkok on Wednesday, will be returned to Ms Sirinan as all the items recovered bore a stamp confirming they were the property of the Yong Chuan store, he added.

Mr Koson surrendered voluntarily to Phuket Police yesterday, saying that he wanted to see his wife again before she died from a heart condition.

Mr Koson has had two children with Ms Mooza, one is his 13-year-old daughter who is now staying with his sister who runs a small curry shop in Rassada.

His other child is in Burma, as is Ms Mooza’s third child, from a previous relationship.

Mrs Mooza has been charged with possession of stolen goods.

A 14-day period in quarantine is required for those entering Phuket who are either not vaccinated against the coronavirus or have not been tested for Covid-19 within 72 hours of arrival.

Phuket Vice Governor Piyapong Choowong made the announcement yesterday, adding they will no longer require Covid-19 tests on arrival. Phuket News notes that the required tests were problematic, particularly for truck drivers who were delivering essential items to the island on a regular basis.

“If you stay in Phuket shorter than 14 days, then you will be in quarantine as long as you stay on the island… From today on, no rapid tests anymore. Arrivals without any documents must get the quarantine order at the checkpoint.”

Piyapong says staff from the Phuket Public Health Office will hand out quarantine orders to those entering the province. The a copy of the order will be sent to the Emergency Operation Centre, which will follow up with those who are in quarantine at their homes or hotels.

The main Phuket checkpoint will only be open from 8:30am to 8:30pm. Only delivery vehicles can enter outside of those hours.

Those only entering Phuket for a short day trip are exempt from the quarantine rule, according to the Phuket News.

Phuket officials are serious about disease control orders banning parties and gatherings with friends, especially when alcohol is involved. They’re so serious, that apparently they’re searching for 4 foreigners who were seen drinking beers at a restuarant in Rawai.

Police raided the restaurant yesterday at a complaint from a woman who works for the local district office. She was out on a campaign pushing for locals to wear face masks when she noticed that some people were sitting at the Roxanne restuarant, having a beer. Photos as well as a video was sent to the police showing a group of 4 foreign men and 2 Thai women sitting at the restaurant together.

Along with police officers, local officials from the Muang District Office and Rawai Municipality showed up to the restuarant. Reports say the men were seen driving off on motorcycles just as as the team of 10 officers and public officials arrived. The beer was still on the table when police arrived.

Officers took the owner of the restaurant and 4 of the employees to the Chalong Police Station. The owner is facing charges of breach of the provincial order banning the sale of alcohol and allowing the consumption of alcohol on the premises.

Just last week, police raided a home in Cherngtalay, breaking up a gathering of 6 people. 2 men from the UK who work in Phuket were taken to the police station and fined 6,000 baht whilst police were still waiting for another 4 people to present themselves at the police station.

As part of the disease control measures to contain the spread of Covid-19, preparing Phuket for a possible Covid and quarantine-free reopening in July, officials have banned social activities and gatherings, with the expection of traditional events like funerals. Phuket authorities have warned that foreign residents who break the rules could be subject to being deported.