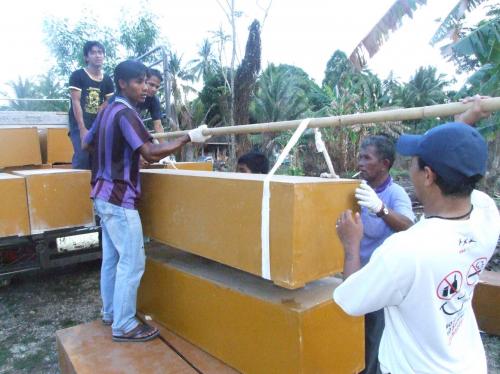 PHUKET: Four Thais found guilty of human trafficking were sentenced to between three and 10 years’ imprisonment yesterday for their intricate involvement in the 2008 “death truck” that left 54 Burmese dead from suffocation inside a seafood container bound for Phuket.

Of the 121 Burmese found in the sealed container heading from Ranong, 17 men, 36 women and one 8-year-old girl were found dead.

“They said they banged on the walls of the container, screaming for the driver to stop. When he did and opened the door to the container, he ran away,” Col Kraithong Chanthongbai of Suksamran District Police told the Phuket Gazette on the day of the horrific event.

The four Thais were convicted of gross negligence resulting in death and of breaking immigration laws, an official at Ranong Provincial Court, north of Phuket, told AFP.

The truck owner, Damrong “Run” Phussadee of Rungruengsup Ltd, was sentenced to 10 years for his involvement.

Chalhermchai “Joe” Waritjanpleng was sentenced to nine years in prison.

The truck driver, Suchon Bunplong, fled the scene, but was later captured and then confessed to his involvement.

He was sentenced to 12 years in prison in 2008, but his confession to trafficking illegal immigrants saw that jail term being halved to six years, Maj Gen Apirak Hongthong, Phuket Police Commander at the time, told the Gazette in June 2008.

Those who survived being crammed into the six meter by 2.2 meter box were immediately detained by police as illegal immigrants to be presented to court the next day.

Survivors recounted desperately trying to raise the alarm as they fought for breath in the back of the truck.

“No matter how many times we hit the container, the driver did not pay any attention,” one female migrant who was on board told Thai television.

Relatives of the those killed were to receive 35,000 baht compensation for each relative who died, Suwanna Suwanjutha, director-general of the Rights and Liberties Protection Department, announced in July 2008.

All survivors were repatriated to Myanmar.