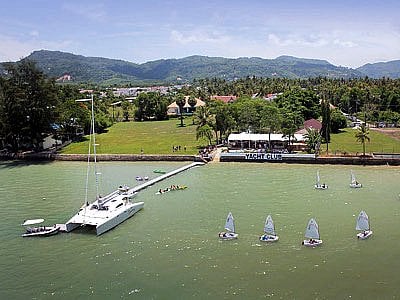 PHUKET: A delegation from the Indonesian Ministry of Culture and Tourism will host a reception for about 200 Phuket residents at Ao Chalong Yacht Club (ACYC) tomorrow.

The event is part of the ministry’s strategy to revive and promote tourism to Aceh Province, the hardest hit landfall of the 2004 Indian Ocean tsunami.

The ministry has identified yachting as a key element in its strategy, and the open invitation to Phuket residents to join the event tomorrow is focused on raising awareness of both the beauty and tranquility of the relatively undiscovered region and, at the same time, promoting entries for the inaugural Sabang International Regatta, explained ACYC Commodore Grenville Fordham.

The Sabang Regatta kicks off in Phuket with a pre-regatta dinner on the evening of September 13, followed by a rally to Langkawi before racing across to, and around, Sabang until September 25.

“We’re delighted to have been selected to host this party,” said Mr Fordham.

“An advance team from the Indonesian Tourism Ministry scouted all possible venues on the island, including all the marinas, and we convinced them that ACYC was the best choice.”

Unlike regattas in Thailand, entry to the Sabang event – which is open to sail and power boats – is free, includes 10 nights of cocktail parties and dinners, and offers cash prizes to winners.

The Indonesian authorities are waiving fees for the Cruising Permit (CAIT), Temporary Import Bond and Visas on Arrival – and even offering participants free fuel, he explained.

The reception tomorrow starts at 6pm.

“The event is open to all island residents with an interest in yachting, who might want to learn more about what Sabang has to offer tourists and have a look at Phuket’s premier yacht club,” said Mr Fordham.

Free food, free beer and wine, as well as live entertainment, are all on the agenda and, for those who are interested in taking up the unique opportunity to cruise around Sabang, there will be an opportunity to have questions answered by the regatta organizers.

“This puts us on the map as a ‘grown-up’ yacht club, the heart of yachting in Phuket and the perfect venue for major events,” said Mr Fordham.

“Who would have believed that what started out 19 years ago as a tiny watering hole for transient yachties would end up hosting an important event for a foreign government,” he added.