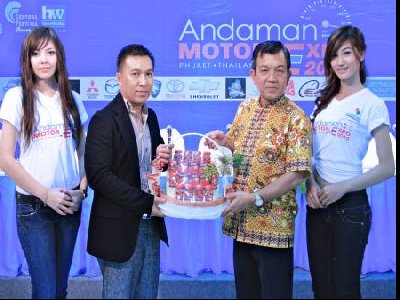 PHUKET: HomeWorks will host the first annual Andaman Motor Expo 2010 from August 6 to 12.

Krishapanat Patwarasith, managing director of event organizers ND Productions, told a press conference yesterday that the car show will be the largest and most impressive ever held on the island, with automakers BMW, Volvo, Isuzu, Chevrolet and many others taking part.

The goal is to give automakers an opportunity to present their vehicles and accessories to buyers in Phuket and throughout the Andaman Coast region, he said.

There will be a wide range of special activities including a music contest, BB gun shooting competition, antique car display, auction and special staged shows by well-know celebrities.

Phuket Vice Governor Teerayut Eimtrakul said the expo has the support of the provincial government, which is dedicated to further developing the island as the premier tourism hub in the region.

The expo is a good example of public-private sector cooperation, he said.

Mr Krishapanat handed a gift basket to V/Gov Teerayut and thanked him for his advice and support throughout the planning process.

ND Productions are also planning to hold a “supercar” show on the island and many organizations have already expressed an interest in taking part, he said.

Ekkachai Krittayon, marketing director of Central Festival Phuket, told the press conference he believes the Expo plans to be a premier event and one destined to become an annual fixture on the island.