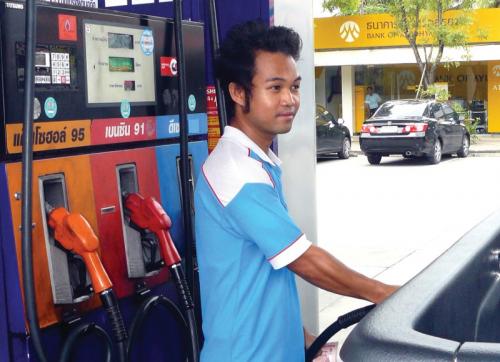 As Phuket looks back a year full many negative news reports, the Phuket Gazette is happy to publish this reader’s first-person account of what makes living in Phuket great.

PHUKET: Phuket is the Thailand I know and love. Having flown straight to the island and stayed, I have only heard rumors of “mainland” hospitality and the kindness Thai people are revered for. This is most often used as a counterpoint to the “bad-apple” attractive force of Phuket. Though I see the works of the bad apples regularly, I find that when I’m truly in need there is always someone there.

As I apparently have no understanding what the “E” on a motorbike fuel gauge refers to, I often find myself stranded on the side of the road out of gas. As Murphy’s Law dictates, this happens at the most inconvenient times – 3am riding back from Patong, or 11pm on the bypass road with no petrol in sight. In these moments, when I am truly helpless to do much else than buckle down and start pushing, I find the people of Phuket quietly stepping up to help.

It was a long night in Patong and I managed to roll down the big hill toward Karon Circle before the bike died. There was no sign of petrol anywhere.

A heavy set “working woman” approached from across the street. There was no conversation about prospective work, she simply wanted to know what was wrong with my bike. Having established I was out of petrol, she offered to get on her motorbike to get some.

Time passed, I grew impatient and started hiking, only to find her zipping back with a bottle of petrol as promised. I can’t imagine how far away the nearest local petrol stand must have been. After fueling up, I asked how much it cost – admittedly nervous about getting skinned. It cost 40 baht… exactly what it cost at the stands. I paid, profusely thanked her and puttered home.

More recently, on the bypass road, I was given a push from a young well-dressed man to the nearest petrol stand after I had, again, run out of petrol.

The island is full of these incidents, these small favors that turn a ruinous night into a passing annoyance. As we step into the new year, I can only hope that us “bar grumblers” start keeping a tally not only of our grumbling points, but also of those times, when in need, we were greeted with earnest concern and a solution.