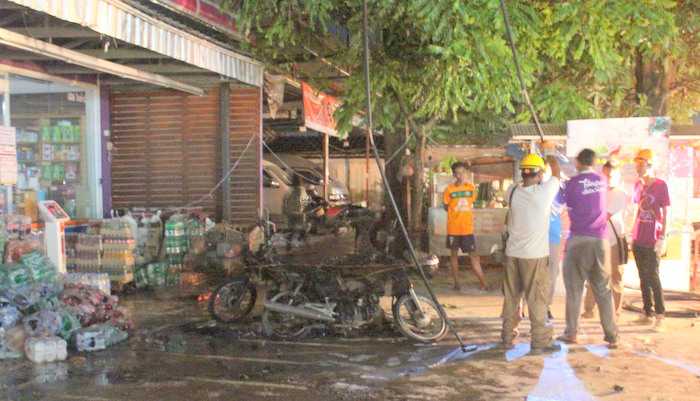 PHUKET: A high-voltage power cable set motorbikes ablaze in front of a Phuket SuperCheap store last night after the overhead transformer it was connected to exploded.

One end of the three-inch-thick power cable, carrying 33,000 volts, connected with the ground and set fire to two motorbikes parked in front of the Phuket Villa 5 branch on Chao Fa West Road.

“We got a call about the accident at around 7pm and immediately called the fire brigade for assistance,” said Lt Jarus Lempan of the Wichit Police.

“At first people were trying to pull their motorbikes away from the blaze, but the heat became so intense it forced the crowd to move back.”

A fire truck quickly arrived on the scene and firefighters took about 20 minutes to bring the flames under control.

The two motorbikes were incinerated in the blaze.

It was impossible to identify the motorbikes, they were completely gutted. Even the number plates had melted,” said Lt Jarus.

An investigation will be carried out to establish how the cable could have disconnected and fallen to the ground, police confirmed.