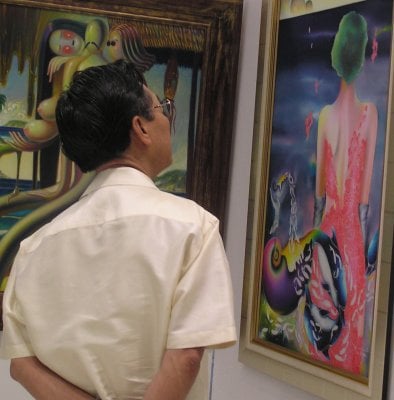 PHUKET CITY: The Phuket Provincial Administration Organization (OrBorJor) has announced that it intends to build an art gallery for the province, after the successful opening of the “Painting Phuket, the Pearl of the Andaman” art exhibition yesterday.

OrBorJor President Anchalee Vanich-Thepabutr said the art gallery would contain art and literature and artefacts relating to the history of Phuket.

There could even be two galleries, one in Thalang and one in Phuket City itself, said K. Anchalee, adding that the OrBorJor would ask the government for 300 million baht to pay for them.

However, even if the government did not approve the budget, the OrBorJor would press on with the project on its own, said K. Anchalee.

She continued, “We are currently drawing up the plans, in consultation with artists, and we want to build the gallery as soon as possible, hopefully within 2006.”

“Painting Phuket, Pearl of the Andaman”, which runs at Central Festival Phuket until April 20, features 210 works by 70 artists, Thai and foreign.

The opening was chaired by former Prime Minister Chuan Leekpai, who is himself a renowned amateur artist.

He told those gathered for the opening, “This is a great exhibition of pictures about Phuket, particularly as it reflects Phuket before the tsunami.

“In the future, people will be able to look at these pictures and compare, say, Kamala as it is here, before the tsunami, with pictures of Kamala after the tsunami, then after the restoration.

“It is important for society to support artists, but there are few exhibition facilities in this province. Phuket should have an art gallery – as Chiang Mai, Khon Kaen, Songkhla, Chonburi and Pattani have already.

“An art gallery would be a real asset – the pictures it would contain would increase in value all the time, not just in financial terms, but as examples of creativity too.”

Leading artist Somsak Raksuwan said he and fellow exhibitors wanted to support tourism; they had not been paid for their pictures – they had donated them as a gesture of support for the community.

He added, “Phuket has great nature. Artists try to catch the spirit of a place, but the pictures are also an invitation to come to Phuket – if people want to see more of what is in the picture, come to Phuket, that kind of thing.”

Trees to act as “tsunami breaks’