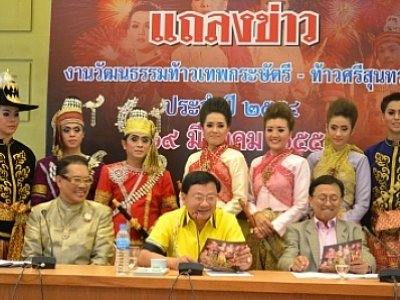 PHUKET: This year’s Phuket Heroines’ Festival will feature the acting debut of Phuket governor Tri Augkaradacha, who will take center stage in the role of King Rama I in a historical drama based on the history of Thalang.

The 2011 installment of the annual event will take place March 13 to 15 at Thalang Victory Memorial Field in Thepkrasattri subdistrict.

It is intended to increase awareness of local history and culture among Thai citizens.

“I will portray King Buddha Yodfa Chulaloke (Rama I). I am honored to have been invited to take this role. I will give my best possible performance,” Gov Tri said.

Dr Sawit Pongwat, screenwriter and director of the Thalang Historical Drama production said, “This will be the first time for this drama to have a sitting governor in the cast.”

The cast comprises some 1,000 people including students, local residents and people from both the private and government sectors, he said.

The 12-act production is scheduled to run for about one-and-a-half hours.

“The scenes will be more realistic than in performances in previous years,” he promised.

“My wish is that this drama will make the audience love their nation and learn about its history at the same time,” Dr Sawit added.

Also to that effect, the Culture Office will offer historical tours of Thalang on March 8 to 10 in the run-up to the festival.

The tours will end back at Provincial Hall at 4pm.

The following events are also to be included in the festival activities:

9:09am: Commemoration ceremony at Heroines’ Monument

Unless otherwise specified, all events will be held at Thalang Victory Memorial Field, located across from the wet market and Thalang Witthaya School on Dom Chom Tao Road (Route 4030) in Thepkrasattri subdistrict, near the intersection with Thepkrasattri Road (Route 402).