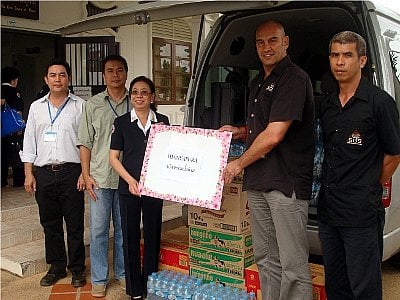 PHUKET: The Phuket Reporter’s Club is accepting donations on behalf of the Phuket Provincial Office to help victims of the severe flooding across northern, central and northeastern Thailand.

The floods have so far claimed the lives of more than 200 people and forced tens of thousands of people to leave their homes.

The Reporter’s Club, located at Phuket Provincial Hall, has been accepting donations of items since last week. The current donation drive will end on Thursday, said Club President Peerapong Ponpramun.

“Right now we have all the essential items, such as rice, canned food, clothes, drinking water and candles,” Mr Peerapong said.

“People can donate until about 4pm on Thursday as we have to get everything ready to leave Phuket on Friday morning,” he added.

The club will not accept cash donations, Mr Peerapong said.

On Friday, two six-wheeled trucks provided by the Phuket Kusuldharm Rescue Foundation will be loaded with the donated items. They will head north to Phitsanuloke, then south to Ang Thong and Sing Buri provinces.

The trucks will be accompanied by members of the Reporter’s Club traveling in their own vehicles.

“We will probably return on Monday,” Mr Peerapong said.

Meanwhile, donations are also being accepted at Tesco Lotus on the bypass road.

“We have since September 23 been accepting donations at the customer service counter for flood victims in other provinces. The campaign will end on October 8,” said cashier manager Sunisa Petyotha.

“We will set a delivery date later. The donated items will be delivered to victims by Tesco delivery vehicles,” she said.

Other private companies in Phuket have been rallying to raise donations as well.

Nalinee Augkaradacha, President of the Phuket Chapter of the Thai Red Cross Society and the wife of Phuket Governor Tri, recently received donations collected through fund-raising efforts by staff at the Thanyapura complex and local security company Siam Guardian Services.

“The floods have been devastating to families and communities in the northern and central provinces of Thailand. We hope that getting our staff members together with those of Thanyapura to raise funds and donate goods will go some way to alleviating the pain and devastation they are experiencing now,” said SGS General Manager Barrie Buck.

Police believe Fake DSI agent is on the run in Phuket