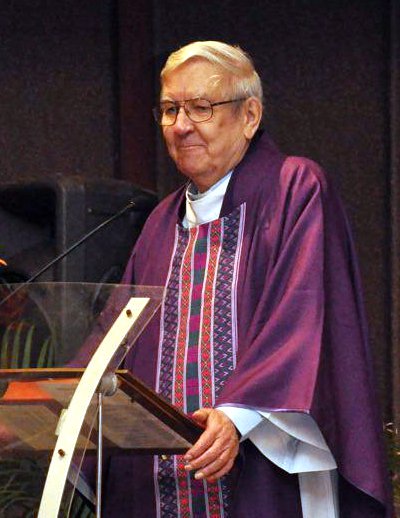 PHUKET: The funeral for Father Richard Woodarek, who served Phuket’s Catholic community for more than 40 years, will be held at Our Lady of Assumption Church in Phuket Town on Wednesday at 10am.

Father Richard passed away on Friday. He was 82 years old and had spent more than half of his life in Thailand, most of that time in Phuket.

Bishop Joseph Pratan, bishop of the Diocese of Surat Thani, will officiate at the funeral, joined by Stigmatine Fathers and Brothers from all over Thailand, as well as parishioners from Assumption Church and other Catholic churches throughout Southern Thailand.

After fulfilling his military duty in the US Army, Fr Richard entered the Stigmatine Fathers and Brothers in 1948 in Waltham, Massachusetts. He was ordained in Rome on May 5, 1957, and assigned to Thailand in 1959.

Father Richard arrived in Bangkok in April 1959. Soon after, he was assigned to develop a language-studies curriculum at Dowroong Wittaya School in Phuket.

His death was sudden and unexpected. He had returned from visiting relatives in the US last Wednesday and returned to Phuket on Thursday.

As he wished, he will be buried at the Catholic cemetery at Darasamuth.

Click here to read more about the revered Father Richard and his time in Phuket, as observed by Mary Doerflein.

Phuket fire drill no cause for alarm