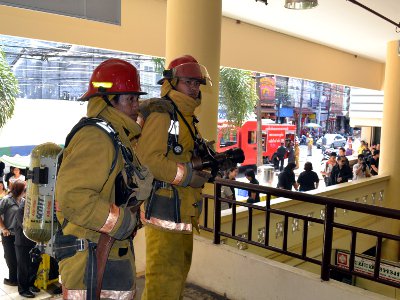 PHUKET: Smoke billowing out of the fresh market on Ranong Road in Phuket Town this morning was no cause for alarm as Phuket City Municipality conducted its first fire drill there since the market opened in September last year.

More than 150 market vendors and other people taking part in the drill poured onto the street at about 10:30am, simulating a mass evacuation of the building due to fire breaking out from a leaky cooking gas cylinder.

During the exercise, a municipality officer stationed at the market simulated containing the fire with extinguishers, but failing.

Pretending the fire was out of control, he then called 199 to bring in reinforcements from the Phuket City Municipality fire brigade, who extinguished the “blaze”.

“We want to be well prepared in case there is a fire at the market, as there are more than 400 vendors here on most days,” said Tawatchai Thongmung, Chief Administrative Officer (Palad) at Phuket City Municipality.

The greatest risk area was the basement level, where vendors cook using gas cylinders, he said.

The fire drill today will become an annual exercise, he added.

Theerapong Iam-Anancharoen, president of the vendors’ association at the market, said he was happy with how the drill was conducted.

“Although we did not have any fires in the old building, we did have electrical short circuits and LPG gas leaks. Thankfully, however, they were quickly dealt with and did not cause fires,” he explained.

“Nobody wants a fire to happen, but we should know what to do in case of fire and we should learn how to use fire extinguishers.

“Also, having vendors being able to tell customers where to exit the building quickly in case of fire should help reduce the chance of anyone being injured,” Mr Theerapong said.