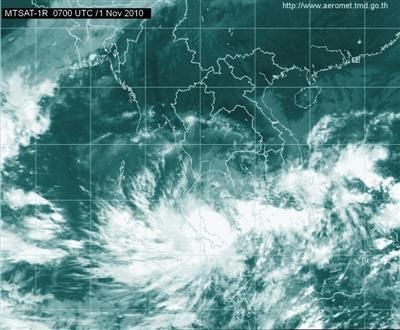 PHUKET: The Meteorological Department this morning issued an advisory warning of heavy rain with the chance of flooding in Phuket.

The warning, also issued for other southern provinces, comes as a tropical depression is passing over the region.

The warning, issued at 11:30am, read that a tropical depression was centered about 270 kilometers southeast of Songkhla with sustained winds of about 50kmh.

The storm center was moving northwest at a speed of 15kmh.

The depression is expected to pass over the lower south tonight, causing widespread and torrential rain from Surat Thani southward.

Wave heights of up to five meters are forecast in the Gulf of Thailand, where all ships were urged to remain in port.

A “heavy rain” warning issued by the MET’s Southern Meteorological Center at Phuket Airport at 10:30am today added that shipping in the Andaman Sea should proceed with caution.

Prevailing northeast monsoon conditions will combine with the arrival of the depression to make the next few days very rainy, according to the MET forecasters.