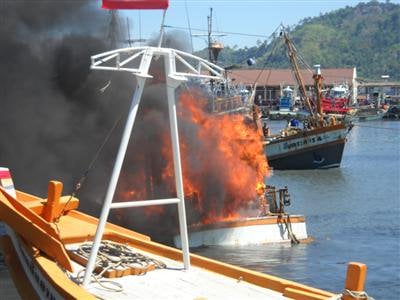 RASSADA, PHUKET: A wooden fishing boat that burst into flames during repair work this morning was deliberately sunk in the waters of Klong Tha Cheen.

Arriving at the Pichai Fish Pier along Klong Tha Jeen in Rassada, they found the 17-meter vessel Pichaithavorn 6 engulfed in flames.

Strong winds and the location of the boat made it difficult for firefighters to put out the blaze, so after a two-hour battle and with the boat almost completely gutted the decision was made to scuttle the vessel.

Initial investigation revealed that the fire began as mechanics were performing maintenance on the vessel’s exhaust pipe.

He said it was too early to estimate the cost of the damage.