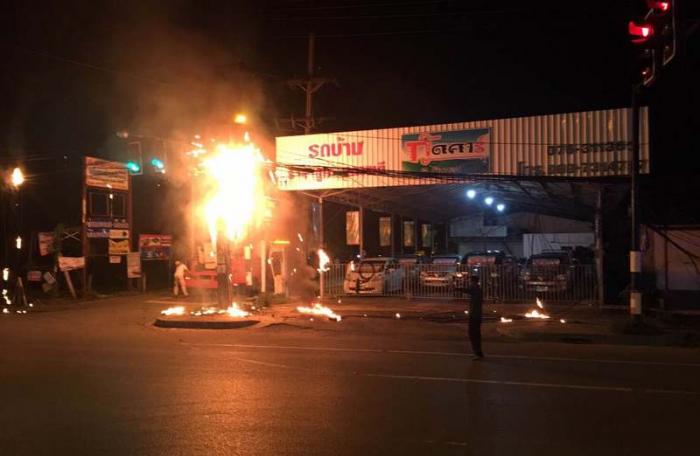 PHUKET: Two power poles on the island caught fire in two separate incidents last night and early this morning, leaving locals in the dark for several hours in some areas.

“We received reports of an electricity pole on fire in Srisoonthorn, Thalang, on Thepkrasattri Road southbound, at about 8:30pm last night,” Amnart Sujjit, a firefighter for Srisoonthorn Municipality, told the Phuket Gazette.

Locals gathered at the scene, afraid that the fire would spread to nearby houses. However, firefighters managed to douse the flames in about 20 minutes.

“The Phuket Provincial Electricity Authority (PEA) had to cut off power in order to investigate the cause and repair any damages,” said Mr Amnart. “While power has been restored to the area, some households are still facing issues with TV, cable and internet connectivity.”

Pa Khlok Municipality firefighters managed to get the flames under control in about 20 minutes.

Details of how either of the fires started have yet to surface, but no injuries were reported in either incident.

Phuket woman begins her walk to the Grand Palace