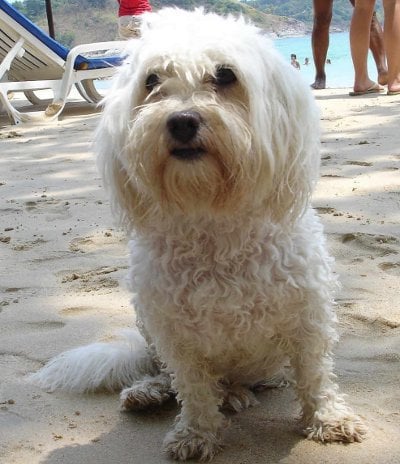 PHUKET: Long-term Phuket expat Frank Lamine has been reunited with his lost dog “Micky”, but his fears of dog-nappers operating at Nai Harn Beach remain.

Mr Lamine lost Mickey on January 22. After checking with police, he learned that Rawai Municipality has CCTV cameras posted at the beach.

“The CCTV footage recorded Micky at the beach at 4:30pm. Then at 4:51pm a Thai woman can be seen carrying him off,” he said.

While searching for Micky, Mr Lamine met a woman who also lost her dog at the beach. Her dog “Klara” was last seen at Nai Harn on January 1.

“She saw Micky at a restaurant about two kilometers from the beach, at about 11:30pm last Friday. She recognized him from photos I sent her, the same photos I sent to the Phuket Gazette,” he said.

The lady at the restaurant said she “got the dog from somebody”, said Mr Lamine.

“I am not sure what to believe, but I am happy to have Micky back. Someone has taken good care of her. It is obvious she has been taken to a pet clinic – but she has been totally shaved. There’s not a hair left on her,” he said.

Mr Lamine counts himself lucky to get Micky back. “The more I talked to people at the beach the more I learned that many dogs have disappeared from there.

“The woman who found Micky is still looking for her dog, Klara. Now I know how these people feel. Every time you mention her dog, she starts crying,” he said.

“Her dog has been missing since January 1, and she’s still looking for her,” he added.

‘Case closed’ on mystery death of Brazilian in Phuket