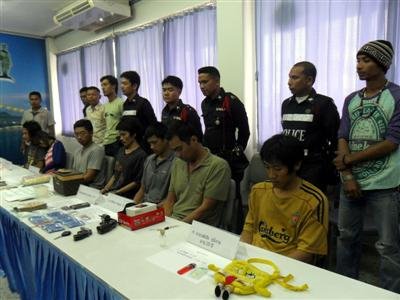 PHUKET: In one of the latest drug busts on Phuket, Thalang Police yesterday presented six suspects arrested for possession of ya bah (methamphetamine) with intent to distribute, seizing some 2,000 pills and 200 grams of ya Ice (crystal methamphetamine) in the process.

Thalang Police Superintendent Witun Kongsudjai told the press at the Thalang Police Station meeting room that the arrests were part of an on-going effort by his department to suppress illegal drug use in the district.

The latest series of arrests began when police served a search warrant on a house on Soi Premruedee in Srisoonthorn Village 5.

Finding three-quarters of a ya bah pill and 1.3 grams of ya Ice, officers arrested local resident Pinyo “Ball” Boonyeun, 23, and Pilaiporn Thareuaraksa, 20, of Kathu Village 6.

Among the evidence seized from the home was 94,030 baht in cash.

From there the officers proceeded to an apartment in the Kan Keha 2 National Housing Authority estate in Baan Lipon where they arrested 24-year-old Anupong “Kwang” Songsri with 128 grams of ya Ice, 12,000 baht, a client list and an expense account book as well as drug-taking paraphernalia.

Seized from the pair were 2,000 ya bah pills, almost 57 grams of ya Ice, three handguns, a Toyota Fortuner, a mobile phone and digital scale.

After that, at 1am on Monday, they expanded the investigation to arrest 20-year-old Wuttichia Phoom-gnam of Srisoonthorn Village 3, who was caught in possession of 2.2 grams of ya Ice.

All six were arrested on charges of possession of a Category 1 drug with intent to sell.

Also presented at the conference was 21-year-old Sittikon Suwankamnerd of Srisoonthorn Village 5.

Police with a search warrant found him in possession of four handguns and a variety of ammunition on Sunday.

Phuket “warms up’ for Mother’s Day