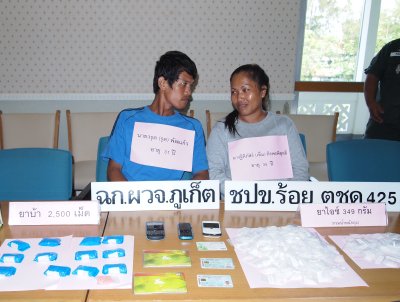 PHUKET: Phuket Police arrested a husband and wife who they say were found in possession of drugs with an estimated street value of more than one million baht.

Phuket Governor Tri Augkaradacha announced the arrests at Phuket City Hall today, adding that a total of seven people were arrested in two separate police operations during the past week.

Altogether, the couple was found in possession of 2,500 tablets of ya bah (methamphetamine), 254 bags of ya ice (crystal methamphetamine), three mobile phones, one motorcycle, two ATM cards and two bankbooks.

Police arrested Ms Thitipat at Soi Koh Kaew 24, off Thepkrasattri Road, with 47 bags of ya ice and five bags of ya bah.

More drugs were seized in a follow-up search of her room at Moo 2, Bang Rong, Pa Khlok, Thalang.

Police then visited her husband, Mr Warut. He was found in possession of 207 bags of ya ice and eight bags of ya bah.

During questioning, Mrs Thitipat revealed that a “Mr Ao” sent her the drugs by hiding them under the loudspeakers in the back of a car. It was Mr Warut’s job to take the drugs onto the streets, said police.

By picking up the drugs every month they were paid 20,000 baht, police said.

Mr Warut and Mrs Thitipat were taken to Phuket City Police Station and charged with possession of drugs with intent to sell.

All five were taken to Phuket City Police Station and charged accordingly.