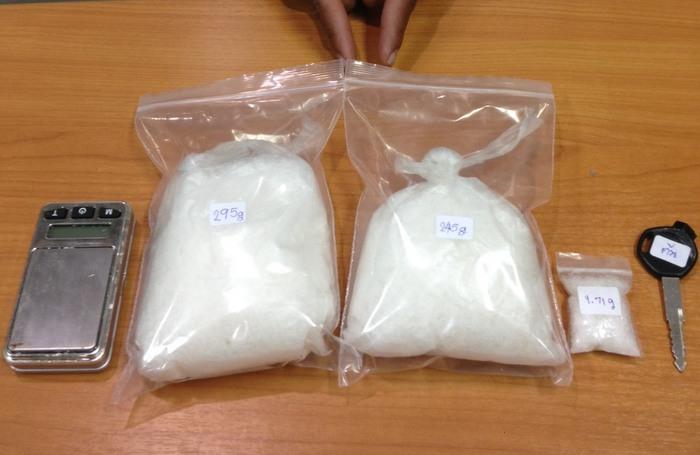 PHUKET: Phuket Provincial Police arrested a drug dealer in possession of more than one million baht worth of ya ice (crystal methamphetamine) on Friday.

Paitoon Asirametee, 26, was apprehended in front of a grocery store in Wichit after police received a tip-off that he had been selling drugs to teenagers in the Muang District.

“Mr Paitoon was in possession of 9.71 grams of ya ice when we arrested him. However, a search of his room near the Soi Guan Yu shrine in Chalong revealed a stash of 540 grams of the drug,” said Lt Col Prawit Engchuan of the Phuket Provincial Police.

Mr Paitoon told officers that he had been hired by an inmate at Phuket Provincial Prison to pick up the drugs in the Tah Chat Chai area and deliver them to customers. However, the customers returned the drugs, claiming they were bad. So, he hid them under his bed, waiting for the original dealer to take them back.

“Mr Paitoon claimed not to know the name of the prisoner who hired him, but did confess to dealing the ya ice while waiting for someone to take the drugs back,” said Col Prawit.

Mr Paitoon was charged with possession of a Category 1 drug with intent to sell.