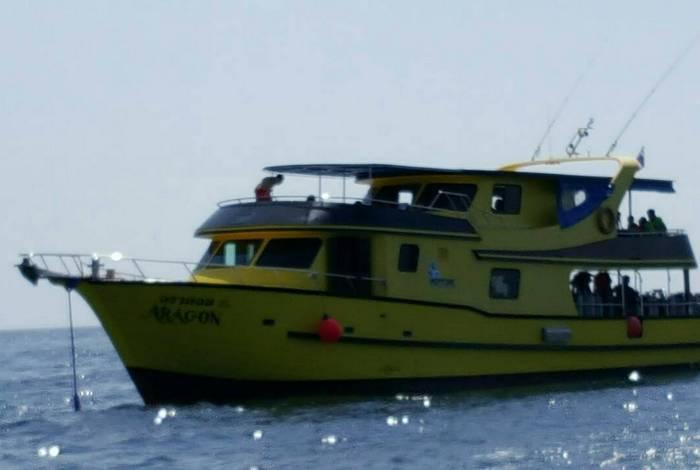 The dive instructors, six of whom were Chinese nationals, were held overnight on Phi Phi and then transferred to Krabi City Police Station where they were held until their court hearing on January 2.

“All seven suspects were certified dive instructors with work permits. However, the work permits were for Phuket, not Krabi,” Krabi Marine Police Chief Anurak Parinyasathiragul told the Phuket Gazette today. “The boat they were working on, Aragon, was taking tourists to dive sites around Phi Phi, which is in Krabi.”

Krabi Marine Police were on patrol on December 31 when they pulled up to Aragon to check both the boat registration and the work permits of the instructors.

“The suspects were arrested in the afternoon, and it was not ideal to pick them up and take them to Krabi City Police Station that day, so they had to spend the night on Phi Phi,” said Maj Jarun Nabphet of the Krabi City Police. “They were brought to the court on January 2 because it was closed on the first. They were fined 5,000 baht each.”

The manager of the Association of Thailand Underwater Sports (ATUS), which assisted the diving community in 2014 after Chalong Police allegedly extorted more than 20 dive instructors based on lack of clarity in work permits, confirmed to the Gazette that she was aware of the situation, but did not know the details of this latest incident on Phi Phi.

Ms Ratanaporn said that law enforcement must uphold the laws that are set in place.

“However, I would like to call together dive instructors and business operators to see if we can work together to push for a change in labor law to allow dive instructors to work on dive sites outside of the provincial waters their work permits are issued in,” she said.

In 2014, ATUS Secretary Pongsawan Sathatham explained that restrictive definitions listed in dive instructors’ work permits presented officials an opportunity to exploit the dive community as a source of ‘unofficial fines’ [under the table payments] for breaking the law (story here).

“What appears to be the problem is what is written in the dive instructors’ work permits. The work is listed as ‘diving instructor’ and under this definition, dive instructors are not allowed to do anything else – not even to carry their own dive equipment,” he said.

Consequently, dive companies across the island suffered a barrage of raids, mainly carried out by the Chalong Police, aimed at snaring foreign dive staff for working beyond the remit of their work permits, he alleged.

Pressure from the dive community and ATUS in April 2014 led Phuket Employment Office Chief Yaowapa Pibulpol to clarify that dive instructors are allowed to lecture students, as well as train with them in swimming pools and in the sea (story here).

“You must carry out these activities in Phuket province only, as the authority of the Employment Office only covers people working in Phuket,” she said.

She went on to clarify that dive instructors are not meant to be tour guides or to help customers carry equipment.

“Thai law lists 39 jobs that are specifically reserved for Thai nationals, and service jobs, such as carrying equipment and acting as tour guides, are included on that list,” Ms Yaowapa said.

Tourism resilience: the mark of 2015