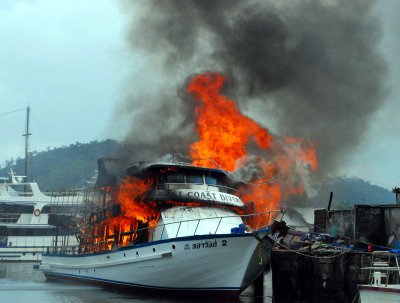 Phuket City Police received a report that the Laddawan 2 liveaboard dive vessel belonging to West Coast Divers was ablaze at Rassada Pier at about 10:30am.

Six fire engines were dispatched from Rassada and Phuket City fire stations to fight the blaze, but could do little apart from stopping the inferno from spreading to other vessels.

Pratueng Boonrod, captain of Saimai 2 docked nearby, assisted in getting the men off the boat and onto his vessel. He heard several explosions as the fire gutted the two-deck vessel, he said.

A police officer told the Gazette he thought the blaze was started by some welding work that was being done on the vessel, which was being prepared for the start of the high season.

Damage to the wooden vessel could be as high as 10 million baht, he said.

The Laddawan 2 made headlines eight years ago when a crewman had his stomach slashed open and his limbs almost severed while cleaning the propeller off Koh Racha Yai.

For the Gazette’s full report on that story, click here.

New artificial reef to be sunk off Phuket