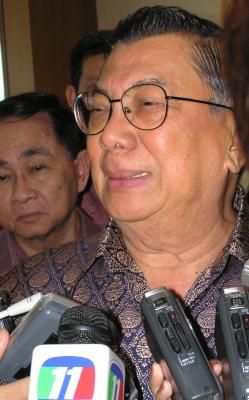 PHUKET TOWN: Phuket and its tourist trade are essential to Thailand’s economy but what matters most is that the island’s inhabitants decide their own future, Deputy Prime Minister Gen Chavalit Yongchaiyuth said today. “I’d like to ask if Phuket people really want to build the International Convention and Exhibition Center (ICEC) or not,” he said of the controversial 2.5-billion-baht project which has yet to lift off the drawing board. “Right now, we have the budget – but what exactly do people want Phuket to be?” he asked. “It’s really up to them to decide what Phuket should be.” Observers saw Gen Chavalit’s comment as an attempt to overcome opposition to the intended site for the ICEC project on reclaimed land off Saphan Hin in Phuket City. “Where the ICEC will be built should be discussed with local people to see if they agree with it or not. If people don’t agree, there will be a problem later,” he said. Gen Chavalit and government spokesman Jakraphop Penkair visited Phuket to meet media from six southern provinces – Phuket, Krabi, Phang Nga, Ranong, Surat Thani and Chumphon – at a seminar at The Metropole hotel in Phuket City this afternoon.