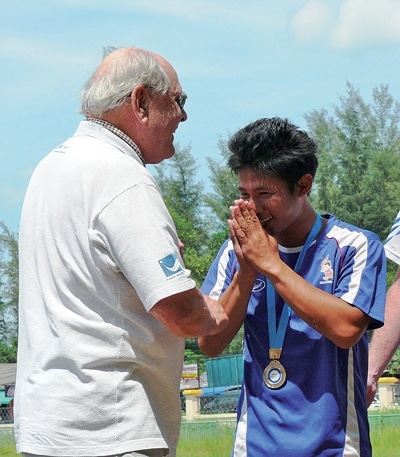 PHUKET: Cricket may not be a sport familiar to many Thais, or expats for that matter, but local school children in Phuket have taken to this skilful pursuit thanks to a dedicated team of volunteers from the Phuket Cricket Group.

“The initiative, which was started a few years ago, is starting to pay dividends. We are very proud of what we have been able to achieve with the kids, and this is evidenced by a Thai youth team which plays in the senior Island Furniture Cricket League,” said Bill.

Four International Cricket Council (ICC) accredited coaches are currently preparing the local Phuket youth team for the Thai National Youth Games to be held in Phuket during March, 2012. The U-19 national competition will see 10 boys’ teams and 10 girls’ teams participating in the cricket competition with representation from Chiang Mai, Pattaya, Petchaburi and Chonburi.

“We will start more intensive training in the lead-up to the games and we hope the home-ground advantage and local supporters will fire the boys up to become National Youth Champions,” said Bill.

The future of cricket in Phuket is very positive with the Alan Cooke Ground (ACG) nearing completion. It will be ready later next month for the upcoming senior league season. The ACG will also be the host venue for the National Youth Games cricket competition, which is sanctioned by the Sports Authority of Thailand.

Once the ground is ready, ACG will provide a bus to transport the kids to training each week where they can practice developing their skills on Phuket’s first dedicated cricket ground.

“It will make a huge difference having such a great facility for training and playing cricket. The kids and the senior players are really looking forward to it,” said Bill.

Rain and thunderstorms have not hampered progress on the Phuket Cricket Group’s new home, the ACG in Thalang.

The grass and the concrete base have already been laid, while the synthetic turf pitch, being provided by the Cricket Association of Thailand, will soon be in place.

“It won’t be long now before the Island Furniture cricket season gets underway and the players are eager to try out the new ground. The Phuket Cricket Group is extremely proud of our new home, provided by long-time resident Alan Cooke, one of Phuket’s most avid cricket supporters” said Pat Cotter, chairman of the Cricket Group.

“Now that the turf has been laid, we need a growing in period for it to take root. We expect it to be ready for the soft opening on November 6, when a Phuket All Star team will take on the Singapore Cricket Club in a Twenty / T20 exhibition match,” continued Pat.

Construction of the two-story clubhouse is also well underway

“With this new facility, we really believe that local residents and visitors alike, will be able to have a great day out,” said Pat.