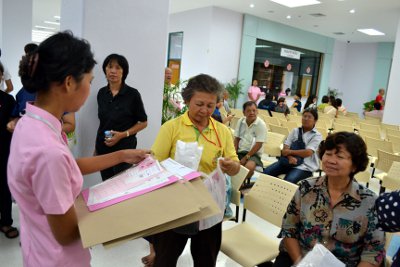 PHUKET: The British and Australian honorary consuls in Phuket have heaped praise on the Phuket Provincial Administration Organization (PPAO) Hospital.

At the meeting of Phuket’s honorary consul with local government officers yesterday, British honorary consul Martin Carpenter said, “There are many foreigners on this island on a tight budget, and this hospital will benefit them because of its pricing policy.

“People should have a look at this hospital and the media should publicize announcements [to let people learn of the services the hospital provides], because if it is not utilized it might not survive.”

Mr Carpenter said the Provincial Hospital, located in Rassada to the east of Phuket Town, played a vital role in providing healthcare to people in Phuket.

“It is a great facility and takes pressure off Vachira Phuket Hospital [in Phuket Town] so they can get on with their own patients,” Mr Carpenter explained.

“I went myself this morning and I also registered as a patient as I have a shoulder problem and visited their physiotherapy department. It is a great addition to this island and I would like to thank the Phuket Provincial Administration Organization for their involvement in providing this hospital,” he added.

Larry Cunningham, honorary consul of Australia, voiced his agreement, and even rated the hospital as “exceptional”.

“In the future, when people on retirement visas here will need medical insurance, it is something that the hospital will be able to provide at a reasonable rate for retirees living in Phuket,” Mr Cunningham pointed out.

The hospital opened in May last year and is operated by the Thonburi Hospital* management group, which has operated Prommitr Hospital in Bangkok independently for several years

The 129-bed Phuket hospital also has the capacity to sign up 35,000 transfer patients registered under the government-run social security scheme, which provides healthcare to all workers who fulfill social security requirements, including foreigners issued work permits.

*Correction: The original report stated that the Phuket Provincial Hospital is being operated by the Banphaeo Hospital management group, in accordance with an agreement signed in 2008. The error is regretted.