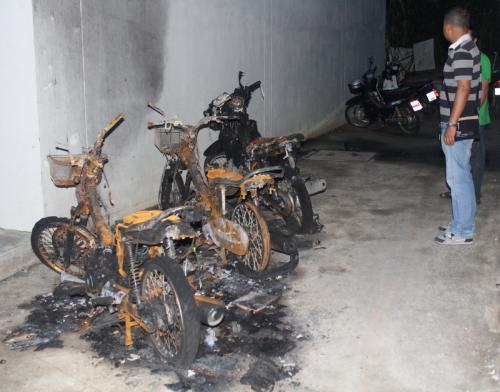 PHUKET: A chef at a seafood restaurant in Karon has confessed to setting alight three motorbikes after he was shown CCTV footage of himself throwing a live cigarette butt at one of the vehicles.

Karon Police arrested Ek Musika, 39, at 5:30pm yesterday after officers tracked him down through the CCTV footage of the incident and by questioning local residents.

The incident occurred at about 5:30am on April 13, explained Karon Police Deputy Superintendent Sophon Borrirak.

“Mr Ek told us he did not intend to burn the bikes. On April 12, he was having drinks at the building with fellow workers from the restaurant. Later, his friends went to sleep and he was about to ride back to his home in Rassada, but he was afraid his bike might not have enough gas,” Lt Col Sophon said.

“He searched around for a shop selling petrol by the bottle, but he could not find one, so he went back to the building where his bike was parked.

“He smoked a cigarette and threw the cigarette butt at one of the motorbikes. When he saw the motorbike catch on fire, he rode off and went to stay at a hotel in Phuket Town,” Lt Col Sophon explained.

“The day after that, he went to see his friends at the building and that is when we arrested him. His friends were unaware that we were looking for him in relation to the fire,” he added.

“He has been charged with recklessly causing damage to property,” Col Sophon said.