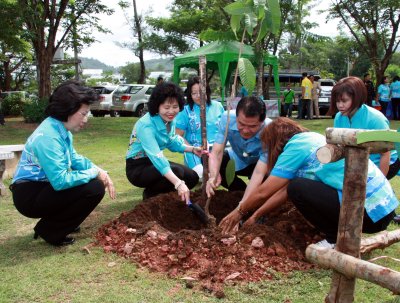 PHUKET: Phuket Governor Wichai Phraisa-ngop on Monday presided over the opening of a project to plant 999 Yang Na trees at Rama IX Park as part of activities in honor of HM The Queen’s Birthday tomorrow.

The event, which began at 9am, also included the release of 9,999 “effective micro-organism” (EM) balls into ponds at the park, also known as Suan Luang.

EM technology uses a laboratory cultured mixture of microorganisms, which are believed by their proponents to benefit whatever environment they are introduced into.

Among the many dignitaries present were Gov Wichai’s wife Thaisika, who attended in her capacity as President of the Phuket chapter of the Thai Red Cross Society, and Phuket City Municipality Mayor Somjai Suwansupapana.

Representatives of many different government offices attended, as did students from Plookpanya School, which is administered by the municipality

For more information about the project read the earlier report by clicking here.