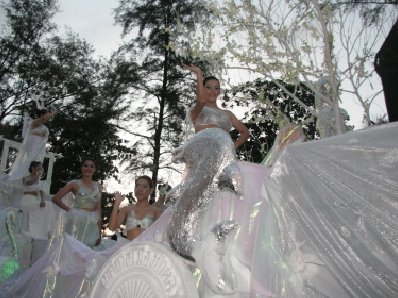 PHUKET: Thousands of people in Phuket flocked to the streets of Patong to watch or join the annual Patong Carnival parade last night.

Starting at 5pm with Patong Municipality’s ‘Pearl of the Andaman’ float, complete with its own angel of the clam, the parade continued for three hours.

School bands and the traditional ladyboys dressed in glamorous outfits marched along the streets, from Phang Muang Sai Kor Rd, along Prachanukroh Rd then along the beachfront.

Each group in the parade stopped briefly in front of the Banana disco, longest continuously running disco in Patong, to present a quick performance expressly for Patong Mayor Pian Keesin and Vice-Governor Weerawat Janpen before moving along.

The parade disbanded as participants reached the Laem Petch football field, across from Loma Park

Entertainment at this year’s Patong Carnival is set to include the first-ever “Festival on the Sand.”

The six-day beach music festival is being billed as the “biggest beach party ever to be held in Phuket,” with a selection of top international Djs set to perform.

Open-air performances will start at 7pm each night and take place at the end of the beach road on Patong Beach. The event is expected to attract up to 10,000 party goers.

During the carnival, the main stage at Bangla Park, next to the police box on the beach, will host traditional performances by local musicians, while a second stage at the football field across from Loma Park will see performances by popular Thai artists.

Phuket Pirates: Being evil isn’t all it’s cut out to be