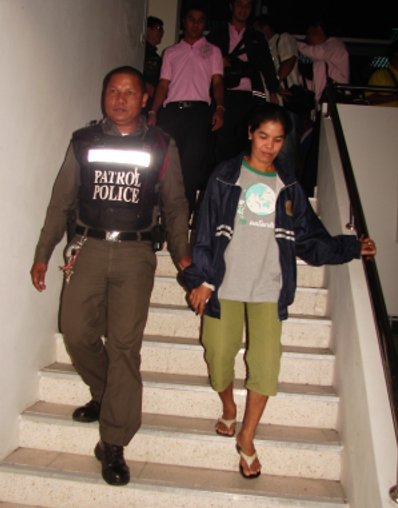 PHUKET: Four people have been arrested for last month’s shooting murder of a Phuket golf caddie.

Ms Amornrat Petchtrong, 26, was killed by a single gunshot to the head outside Mission Hills golf club in the early hours of December 7.

Ms Prathum, 42, said she was displeased with the relationship between her brother and Ms Amornrat.

“She [Ms Amornrat] took my brother’s money little-by-little – more than 100,000 baht. She also convinced my brother to divorce his wife and leave his [then] two-month-old child,” Ms Prathum said.

“And recently, while my brother was staying at a temple as a monk, she [Ms Amornrat] was with another man,” Ms Prathum added.

At one point Ms Prathum called Ms Amornrat’s mother in Kanchanaburi, requesting that she come and take her daughter back – and warning that if she didn’t she would have to come and collect a body.

Ms Prathum made good on her threat by asking her friend Mr Paisan, 33, to find a gunman to kill Ms Amornrat, police alleged.

At Ms Prathum’s bidding, Mr Paisan hired Mr Pongsak and the 17-year-old, both from Songkhla province, to do the job for 30,000 baht. Mr Paisan also provided the hired guns with accommodation and the murder weapon, police said.

According to a police statement, on December 7 Mr Paisan drove a motorcycle to Mission Hills golf club to identify Ms Amornrat as she was driving her motorcycle to work.

Meanwhile, the boy, with Mr Pongsak as a passenger, waited nearby on another motorbike.

Once the “mark” was made, the duo approached Ms Amornrat and Mr Pongsak shot her in the head, the statement read.

Mr Pongsak and the boy fled back to Songkhla immediately after the murder and Mr Paisan stashed the murder weapon at his cousin’s home on Koh Yao Yai, the statement read.

Ms Prathum, Mr Paisan and the 17-year-old have been charged with conspiracy to commit murder and Mr Pongsak with pre-meditated murder.

All four have confessed to the charges, police said.