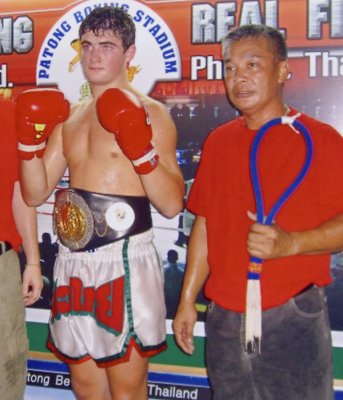 PHUKET: The Phuket Amateur Boxing Club (PABC) will take a team of six promising international-style amateur boxers to compete in the Thailand Mini-Junior Open Championships, to be held July 14 to 18 at The Mall Ngamwongwan, in Nonthaburi.

The event, divided into nine weight classes and open to boxers aged 14 to 17 years old, is part of the Amateur Boxing Association of Thailand’s efforts to identify the next generation of amateur boxers who will go on to represent the country in international competitions, including the Olympic Games.

The card, with eight to 10 bouts, is also expected to feature an “ultimate fighting” match, only the second time such a fight has been staged in the province.

Master Jay told the Gazette that 50% of the proceeds from tickets bought directly from the PABC will be used to help pay for the trip to Bangkok and to offset the cost of organizing the fund-raiser, which he estimates at about 150,000 baht.

A number of gyms around the island are members of the PABC. Master Jay said that he and two other trainers had agreed to coach the young boxers on a voluntary basis, starting about six months ago because, in the past, few Phuket gyms were interested in amateur boxing because it offers little potential for profit.

However, he said, amateur boxing is a great way for boys to learn mental and physical discipline – with the possibility of following the path to glory of Somlak Kamsing, who in 1996 became Thailand’s first-ever Olympic gold medalist.

Master Jay has high hopes for his own son, Thanawat, who will be fighting in the 51kg class and is the only member of the group with a pure-Queensbury-rules background; the other boys are converted Muay Thai fighters.