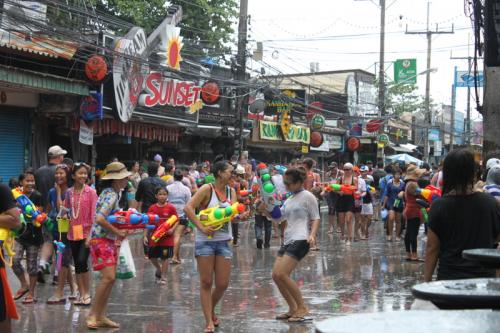 PHUKET: Officials may have just thrown a wet blanket on party plans for Phuket residents and locals alike with the announcement that the sale, purchase and consumption of alcohol will be banned on Patong’s famous Soi Bangla on April 12 as part of a slew of new precautions to make Thai New Year festivities safer.

Phuket officials today established six main “water play zones” – the only places where water play will be legal – and outlawed alcohol in those zones.

Alcohol may not be conveyed into the areas, sold in the areas, or consumed there.

The zones are as follows:


Revelers caught drinking and driving will be charged, as will those found drinking alongside public roads.

In addition, police will be manning 15 checkpoints throughout Phuket during the Seven Days of Danger, April 11-17.

Water play areas are being set up on a national level, with zones set at the provincial governor’s discretion, announced Deputy Interior Minister Chat Kuldilok on March 29.

Water play from the back of pickup trucks has also been forbidden at the national level.

“The number of road accidents during Songkran is much more than normal, so this year we have launched new road-safety plans,” General Chat said.

He also warned Songkran revelers that they will face legal consequences if they ignore the play zone and no-truck fight rules.

“Whoever breaks the regulations will be charged with causing a public nuisance or endangering public safety,” he explained.

“I’d like to reiterate that whoever is caught drunk driving will be imprisoned for up to six months, fined up to 10,000 baht, or both,” he added.

Police road-safety checkpoints in Phuket will be at the following locations:

Phuket Gazette Sports: Motorcycling – No end in sight for the reign of Spain