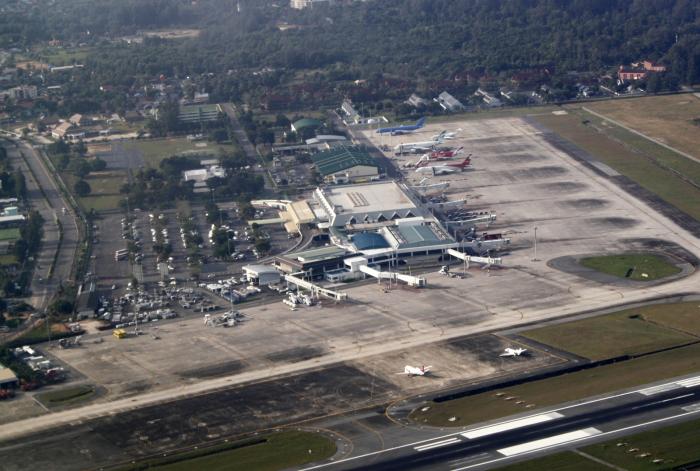 “The airport is set to be located in Taimuang District. The project is backed by a private company that has asked to remain nameless for the time being,” the governor says.

“The airport will be situated about 40 kilometers from Phuket International Airport (PIA). Its dimensions and other details have not yet been disclosed.”

For those familiar with the area, the site is roughly 10kms north of Taimuang center and 27kms south Khao Lak center.

The governor noted that the traffic going through PIA is now about 12 million tourists per year, while its current capacity is only 6.5 million. He added that public hearings would be held to determine whether locals support the idea or not.

Airports of Thailand Plc President Nitinai Sirismatthakarn told the Gazette last month that any further expansion of the domestic terminal building in Phuket will not be possible due to the limitations of the land on which the airport is built (story here). The only options remaining for further airport development would be extension into the sea or removal of the surrounding hills, he said.

“A lot of people ask the AoT, ‘what are we going to do after the last phase of Phuket Airport is complete for [a capacity of] 18 million passengers?’. I just ask them back, ‘what is Phuket City going to do about the traffic?’. The bottlenecks are in the city, not at the airport,” said Mr Nitinai without elaborating on its relevance.

Environmental experts have shot down the runway expansion plans due to concerns about the negative impacts on the environment.

“The expansion of the runway is not the only option we have,” said marine expert Dr Thon Thamrongnawasawat.

“The sea is the heart of Phuket; to expand into the sea means to attack the heart. We must think about the consequences before we do anything further.”

Dr Thon also warned that if construction begins, he would consult with environmentalists to oppose the project.

“I completely disagree with the idea as it will harm the environment. Nai Yang and Mai Khao beaches are also home to turtles, who will be adversely affected by the construction,” said Dr Thon.

“I am not trying to prevent economic growth, but rather suggesting that growth should come from abundant natural resources, and that they should be kept safe for our future generations as well.”