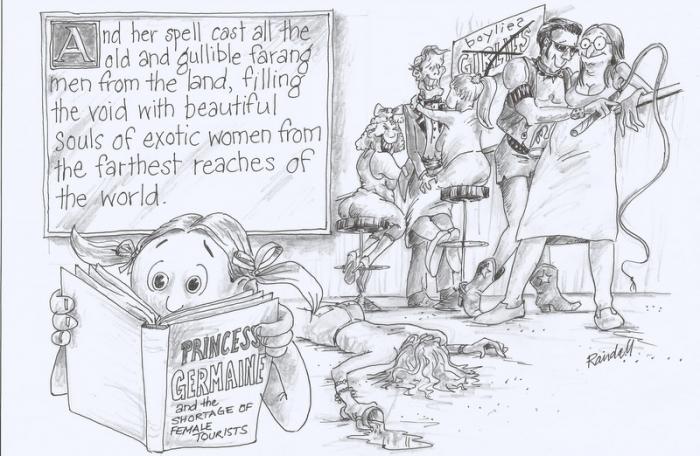 PHUKET: The Tourism Authority of Thailand (TAT) has a rich and diverse history when it comes to churning out tourism promotion campaigns, so it comes as a bit of a surprise that the agency’s recent designation of August as its ‘Month for Women Travellers’ has managed to raise a few eyebrows.

The TAT clearly recognizes that the gender ratio of visitors has been skewed over the decades, with male tourists consistently outnumbering their female counterparts. The last official TAT reference to the imbalance that we could find put the ratio at about 60:40 – probably a conservative estimate.

One need not possess the insight of Einstein to come up with a plausible explanation for the persistent imbalance – it could be our huge, tourist-oriented sex industry, which so far has catered predominantly to male visitors.

Given our national obsession with keeping up appearances to protect ‘face’ when the truth is so obvious and inconvenient, it comes as little surprise that Thailand’s reputation as a sex tourism destination is never directly addressed by the TAT. Rather, government officials simply make subtle references to the country’s ‘vibrant nightlife scene’ when forced to mention this ever-present elephant in the room.

Interestingly, the upcoming promo was initially branded as ‘Ladies’ Month’ when first pitched by the TAT early this year. An official TAT news release published in April hints at enticing underlying attractions: “Of course, the nightlife has long had a reputation for being aimed mainly at male tourists. But this is all changing, and many pubs and clubs are targeting women travellers by arranging ladies’ nights, often mid-week, when it’s possible to enjoy cut-price drinks and food.”

By the time it was fully baked and ready for roll-out, however, ‘Ladies’ Month’ had morphed into a mumble with ‘Month for Women Travellers’ – which makes us suspect that there may be too many outmoded and ‘politically correct’ chefs in the TAT kitchen.

Why all this backtracking and beating it around the bush? We think the original ‘Ladies’ Month’ moniker was not only more natural, but a also a much sharper knife with which to help bring Thai tourism up to the times.

But regardless of the name, this watered-down promotion is unlikely to have much of an impact here in Phuket as it’s hobbled by one of the slowest – and rainiest – months of the year.