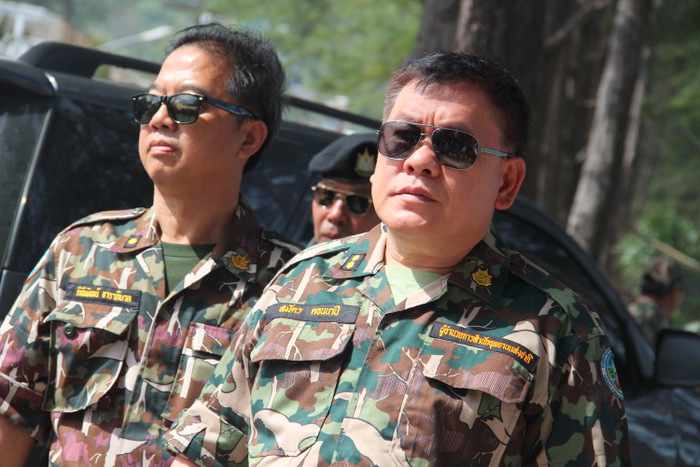 PHUKET: Shops and restaurants torn down by officials at Nai Thon Beach yesterday were bought for as much as 7 million baht apiece and fetched rental fees of up to 400,000 baht a year, officials have revealed.

“It is obvious that the people who run these shops are business operators, not local people living day by day,” Sirinath National Park Chief Kitiphat Tharapiban told the Phuket Gazette.

The news came as about 150 officers tore down seven shops and gave 11 other shop operators at teh beach 30 days to move out.

The contingent of officers included personnel from the Royal Thai Navy, the Department of Special Investigation (DSI) and the Anti Money Laundering Office (AMLO), all led by Department of National Parks, Wildlife and Plant Conservation (DNP) Director Samak Donnapee.

Mr Samak was making good on the promise he made on Tuesday to clear the vendors off Nai Thon Beach (story here).

“We had already issued eviction notices to the seven shops, but they failed to comply, so we had to take action,” said Mr Samak.

The shutdown of the 11 remaining shops still has to undergo due legal process, Sirinath National Park Chief Kitiphat Tharapiban told the Gazette.

Formal complaints against them were filed with police yesterday, and the vendors themselves are to receive formal notice today that they have 30 days to remove their buildings from the beach, Mr Kitiphat said.

The 11 vendors may appeal the eviction notice within those 30 days.

“We will send any appeals to the DNP head office [in Bangkok] so our superiors there can decide whether or not the buildings are to be removed,” Mr Kitiphat said.

“But if the appeals are denied, we will issue another eviction order that will give the vendors 30 days to comply with no more appeals.”

If the 11 vendors still do not comply, the DNP will tear down the shops and charge the vendors for the inconvenience.

“They will have to pay us the cost of the labor, which will be charged at the standard minimum daily rate,” Mr Kitiphat warned.