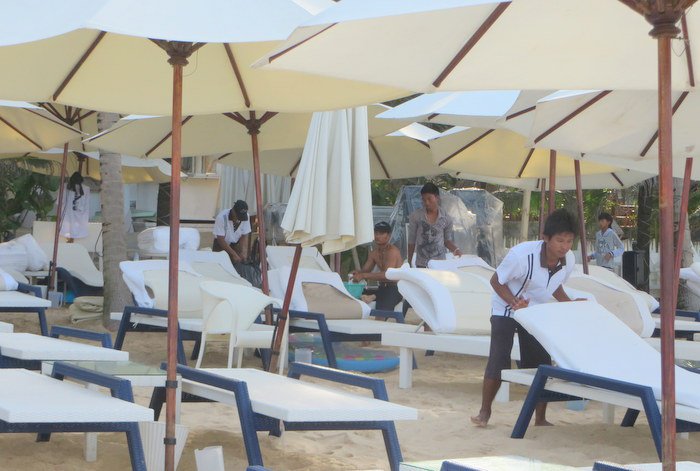 PHUKET: Contrary to earlier reports, no final decision has yet been made by Governor Nisit Jansomwong on how to manage Phuket’s controversial beach chair situation.

At a meeting on Thursday, Pun Thongchumnum, head of the research team from Prince of Songkhla University’s Phuket Campus, informed the governor of the results of the team’s investigation.

The team suggested the government continue to use the 10 per cent zone system, allowing beachgoers to bring their own umbrellas and mats, while rental operators continue to be allowed to provide mats and umbrellas only,” said Dr Pun.

The team also suggested that some policy be put in place to allow the elderly and disabled to access beach chairs one way or another.

However, such a loophole in the system is open for abuse, as the research team did not address in the meeting who would be available to rent out chairs to the disabled and elderly, or who would be making the judgment as to who is qualified for the privilege.

The recommendations were backed by months of research conducted by the university’s Phuket Beach Management Research team.

“Our team, comprising professional, non-biased researchers, spoke with all stakeholders before putting forth our suggestion,” said Pun Thongchumnum, head of the research team.

The research identified six major stakeholders: Tourists (75 per cent of those spoken to were westerners); Beach Vendors of all types, as well as local Tourism Authorities; Local Residents, both those inland and those in the beach communities; High-ranking members of the Local Governments; Honorary Consuls; and the Online Community.

“Based on the interviews we conducted with tourists arriving and departing Phuket, the number one priority was clean beaches. This was followed by ‘pure nature’ and facilities, with beach activities being of the lowest priority,” said Dr Pun.

After speaking with interested parties, the research group was able to divide the facilities category into two groups: paid and unpaid.

“Most wanted to be able to use umbrellas and sunbeds, while having access to beverages – all as paid services. The most important unpaid service was security,” Dr Pun said.

It has yet to be seen if the recently launched Phuket Beach Police units will fulfill this need (story here).

The study also found that many local people agree with the 10 per cent zoning system, while vendors continue to disagree with the plan. However, researches suggested that they coordinate their efforts to work together under the provincial beach management committee.