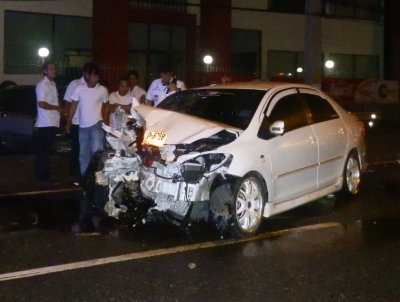 UPDATE: Since this story was posted online, the Gazette has learned that car accident victim Christian Roth was the Operations Manager at the Xana Beach Club, operated by Angsana Laguna Phuket and Attica.

Kampanat Mataramanee, Associate Relations Manager of Angsana Laguna Phuket, confirmed that the Mexican Embassy in Bangkok has been notified of the incident and that Mr Roth’s family will arrive in Phuket on Sunday to make arrangements for Mr Roth’s funeral in his native Mexico.

PHUKET: A Mexican national died early this morning when the car he was driving, on the wrong side of one of Phuket’s most dangerous roads, struck an oncoming vehicle, injuring the three occupants.

Thalang Police received a report at 2:45am of a dead man in a new white Toyota Vios at a u-turn on Thepkrasattri Road in Srisoonthorn, about two kilometers north of the Heroines’ Monument, opposite the Provincial Electricity Authority substation.

Capt Patiwat Yodkwan arrived at the scene with volunteer rescue workers from the Kusoldharm Foundation and Baan Nai Khlam organization to find a large crowd of onlookers gathered near two badly damaged cars on the road: the white Toyota Vios and nearby a crumpled black Toyota Corolla Altis containing three injured people.

An international driving license at the scene identified the dead driver of the white Vios as 30-year-old Mexican national Christian Werner Roth.

Kijjakarn Manajit, 23, the driver; Khuntub Alaisuk, 21; and Taksin Sirijun, 23, a leading aircraftman of the Royal Thai Air Force, were all taken to Thalang Hospital before being transferred to the better-equipped Mission Hospital Phuket and Phuket International Hospital.

From witness statements, the police deduced that Mr Roth had driven the vehicle south along the northbound carriageway. The vehicle was in the lane nearest the median about 20 meters before the u-turn when it struck the Altis head on.

It is not known how far Mr Roth had driven the car along the northbound carriageway. Currently police believe that the accident occurred because he was not used to driving on the left, as in Mexico they drive on the right.

“I cannot say whether the man [Mr Roth] was also drunk until the medical examination results are released,” said Capt Patiwat.

The Mexican embassy in Bangkok had been notified of the incident, and Mr Roth’s body was transported to Thalang Hospital for examination and to await instructions from his relatives, he said.