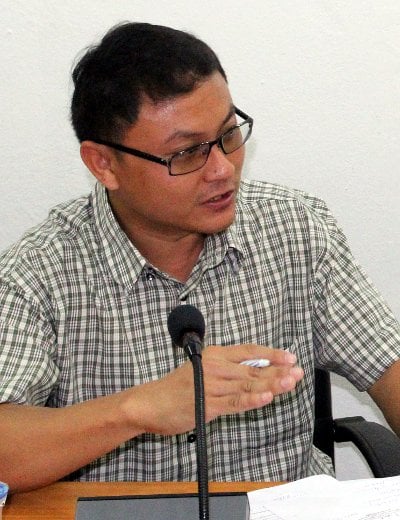 PHUKET: With concerns of 500 members arriving to join the red-shirt rally in Phuket on Sunday, and at least 1,500 yellow-shirt supporters staging a mass rally at Phuket Provincial Hall at the same time, Phuket authorities yesterday called for both sides to respect each other group’s democratic rights and to not engage in any conflict.

The news came at a meeting called to specifically address the security concerns following the mass rally by members of the “We Love Phuket Club” at Provincial Hall Thursday.

“This is a very sensitive issue. Police and the Provincial Administration must be fair to everyone. If the United Front for Democracy Against Dictatorship [UDD] wants to hold a political rally, then we cannot stop them. It is their democratic right, as long as they act within the law,” said Phuket Vice Governor Somkiet Sangkaosutthirak.

However, Royal Thai Police Phuket Special Branch (Santibaan) chief Chaisak Sawasri advised it would be prudent to keep an eye on both factions on Sunday.

“This is a very sensitive issue. According to our information, there will definitely be a red-shirt activity on Sunday, starting at 8:30 am. However, we have yet to confirm where. It will probably be held in Sakoo or a public place past Thalang Technical College on the way to the airport,” he said.

Maj Chaisak explained that he had been informed of fellow red-shirt supporters arriving from Chumphon, Ranong, Krabi, Nakhon Sri Thammarat and Phang Nga to join the rally.

“In all, there will be about 500 UDD supporters in total,” he said.

“There will not be any problem if they hold their activity within the law. What I am worried about is an attack between the two groups. The We Love Phuket Club will be at Provincial Hall at the same time, on the same day.

“As I have heard so far, the We Love Phuket Club and their fellow supporters will number about 1,500 people, but they can get a lot more with just a few phone calls,” Maj Chaisak said.

Nattapol Longkliang of the Thalang District Office, which is the government office directly responsible for Nai Yang Beach, where the UDD has announced it will hold its rally, said he had been informed that the red-shirt event on Sunday is aimed to achieve little more than affirm that red-shirt supporters are in Phuket.

“Like a symbol telling people that red-shirt supporters in Phuket still exist,” he said.

“The key red-shirt supporters in Thalang are in Baan Bang Ma Lao Moo 5 village, but there are others who do not agree with them. I do not think there will be enough supporters for any village in Phuket to be declared a ‘Red Shirt Village’,” Mr Nattapol added.

Sonthaya Laolang, village headman at Baan Bang Ma Lao, agreed. “Most of the people in Sakoo who support the red shirts are food venders, but Suchart Phetcharat and Surin Yotharak are the key red-shirt supporters in Thalang,” he said.

To this Phuket Provincial Police Deputy Commander Sakchai Limcharoen, who is currently also Acting Superintendent of Phuket City Police, countered, “The ‘mainstay’ in Nai Yang is only a local co-ordinator. We should contact the red-shirt ‘mainstay’ for Phuket and ask them to make sure the protest is peaceful.”

On this advice, Vice Governor Somkiet thanked Phuket Santibaan chief Maj Chaisak for his input and assigned him to provide the vice governor with updates every three hours throughout the day.

“We cannot stop the UDD supporters from holding their rally, that is their right, but we can secure public safety. We have to ensure both groups protest in peace and not let them move anywhere else.

“We also need to make sure we keep an eye on the ‘hardcore’ members [sic] in each group to make sure they do not cause any trouble,” V/Gov Somkiet said.

He also assigned protection units to provide security at both the red-shirt rally and at Provincial Hall.

“We have to be fair to both sides. They all have the right to express their political views. Our duty is to ensure it all goes peacefully,” V/Gov Somkiet added.

“Minute man’ robber makes off with B19k at gunpoint