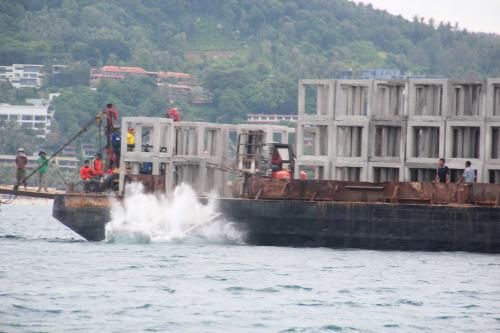 PHUKET: The ongoing project to develop artificial reefs off the west coast of Phuket continued today as the process of dropping 1,880 concrete frames to the sea floor began off Karon Beach.

Over the next several days, the concrete frames will be dropped in clusters over a total area of 24 square kilometers, stretching from the north end of Karon Bay to the southern end of Kata Bay, explained Manop Leelasuthanon, Chief Administrative Officer of the Phuket Provincial Administration Organization (OBorJor).

“This part of the project costs 9 million baht,” said Mr Manop, who is credited as one of the key drivers behind the project.

Sompong Dapetch, a deputy mayor at Karon Municipality, explained that today’s launch of the project at Kata and Karon follows two previous efforts: first at Nai Yang three years ago, and then at Bang Tao and Kamala Bays in February last year.

“After the first project, we studied the effect the artificial reefs had. We found that over time many sea animals and certain types of corals colonized the area,” Mr Sompong said.

“However, the projects at Nai Yang, Bang Tao and Kamala bays were not as effective, as many fishing boats destroyed the artificial reefs with their fishing nets.

“This time, to avoid the same thing from happening again, we called in all related people, including people from the local fishing industry, and explained the project to them,” he said.

OrBorJor President Paiboon Upatising, who presided over the official launch of the project this morning, praised the initiative for the potential multifaceted benefits it could bring.

“Through this project we can conserve the environment and can help marine ecosystems to recover, while attracting more tourists to Phuket and boosting the income generated by tourism for the local economy,” he said.