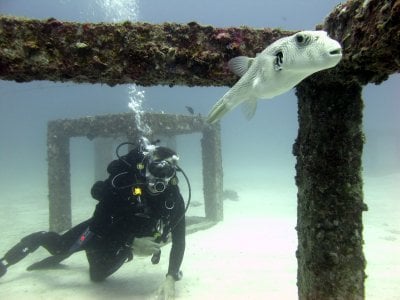 PHUKET: Officials are trumpeting the success of an artificial coral reef off Racha Yai Island, some 25 kilometers south of Phuket, that has become a hit with foreign and Thai divers.

As many as 100 divers are visiting the “Star Ruby Point” reef every day, according to Paitoon Panchaipum, director of the Department of Marine Coastal Resources in Phuket (DMCR).

Mr Paitoon said the reef was sunk off Racha Yai’s Teu Bay at the end of last year in a joint operation by his agency, the Phuket Provincial Office and Racha Yai tourism officials.

The Harruby, around 18 meters long, was more than 10 years old at the time of sinking. The steel in the vessel was worth about three million baht as scrap, according to the DMRC.

The boats have become home to a variety of marine life, including sea turtles, puffer fish, moray eels and butterfly fish.

In addition to swimming alongside the sea creatures, divers can explore inside the vessels, Mr Paitoon said.

The aim of the project was to help local marine ecosystems recover by taking pressure off natural coral reefs popular with recreational divers, he said.

The reef, increasingly well known in diving circles, has become a “must” for visiting divers, he added.

However, one long-established source in the local dive industry said he had “never heard of” Star Ruby Point and understood that the reefs along Racha Yai’s east coast were still the main attraction in the area.

The hailed success of Star Ruby Point comes in contrast to the fate of the Coral Reef Squadron, an ambitious artificial reef sunk off Bang Tao Bay in November 2008.

Consisting of ten decommissioned military aircraft, the reef squadron was a hit with divers until storms and strong currents caused it to disappear during the 2009 monsoon season.