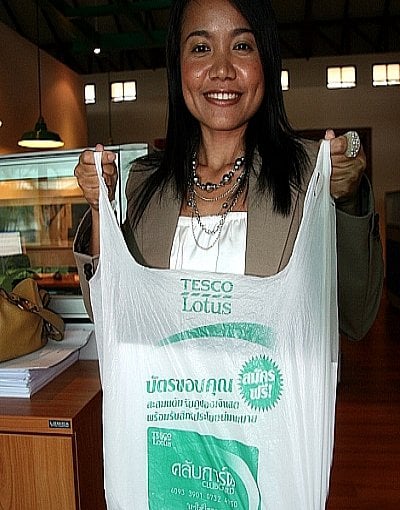 PHUKET: The provincial government campaign to rid the island of plastic bags will start in earnest on February 27, when retailers across Phuket will start handing out free cloth bags to shoppers over the course of one week.

The news was announced on Friday by Phuket Vice Governor Somkiet Sangkaosuttirak at the signing of the second Memorandum of Understanding (MoU) of the “Phuket plastic bag free campaign”.

The campaign aims to hand out 840,000 free cloth bags in 84 days to honor the 84th anniversary of HM King Bhumibol Adulyadej.

“The second MoU has just been signed by more than 40 government departments, schools, local administration organizations, shopping stores, clubs and associations, and now the campaign is ready to be launched on February 27, 2012,” V/Gov Somkiat said.

“But if they bring cloth bags to work, they will be rewarded,” he added.

Members of the public visiting government offices will also be given preferential treatment for bringing cloth bags, V/Gov said.

“We will reward those who come to government offices with cloth bags by giving them priority service and a souvenir,” he said.

Shopping malls are also to run the campaign, but using different ideas.

“The shopping malls will start the campaign by not giving out plastic bags one day a week. People coming to shop will be given free cloth and paper bags.

“Discounts and extra loyalty points will be awarded to those who keep bringing their own cloth bags to the same store,” V/Gov Somkiat explained.

“We will officially launch the campaign island wide on February 27. I hope everyone is going to cooperate so our island can become plastic-free,” he added.