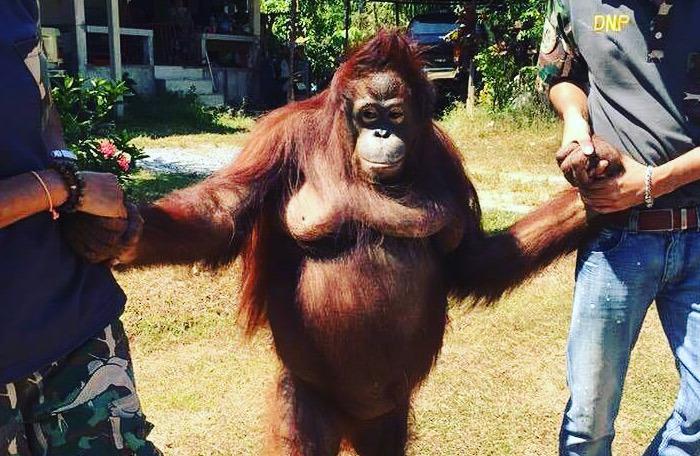 “The Zoo manager, Surapong Chanthaweewong, has refused to answer any questions with regard to how the orangutan was obtained, cared for, or ‘released into the wild’,” said Piyawat Sukhon, chief of the Khao Phra Thaeo Non-hunting Zone. “He simply told us that we should continue with the legal process.”

When contacted by the Phuket Gazette, the Phuket Zoo employee who answered the call declined to comment and denied having any contact information for the Zoo manager.

“We are still collecting evidence, which we plan on handing over to police next week. We will also be submitting a letter to Phuket Provincial Police Commander Teeraphol Thipjaroen,” said Mr Piyawat. “Anyone with information that might be used in the case, please submit it to us.”

Information can be delivered to the Khao Phra Thaeo Non-hunting Zone Office near the Thanyapura training center or emailed to piyawat_forest@hotmail.com.

“We will submit all the evidence we have. Let’s just see what happens,” said Edwin Wiek, founder and director of the Wildlife Friends Foundation Thailand (WFFT). Mr Wiek, along with local animal-rights activist Vicki Kiely, have been instrumental in helping Milo to gain her freedom.

Pressure on the zoo began to mount after Ms Kiely garnered more than 8,000 signatures on her petition to ‘Save Milo’ on Change.org.

“The Natural Resources and Environmental Crime Division (NRECD) of the Royal Thai Police and the Department of National Parks (DNP) agreed to investigate the case of Milo,” Mr Wiek explained on February 19. “The DNP regional wildlife office found that Milo was probably being kept illegally at the Phuket Zoo, as there was no orangutan legally registered at the location.”

However, police officers arrived at the zoo only to find that Milo was gone.

“All her photos with tourists were also removed from the zoo; they were even deleted from the Phuket Zoo’s website,” Mr Wiek said.

“The owner of the zoo told police and witnesses that he had ‘released’ Milo into the Khao Phra Thaeo Non-hunting Zone, a small patch of rain forest on Phuket. He further claimed that this was where he found her two years ago.”

The next evening, the Khao Phra Thaeo Non-hunting Zone officers discovered Milo locked in a tiny cage deep in the jungle.

Milo was taken to the station before being moved to the Khao Prathap Chang Wildlife Sanctuary in Ratcha Buri, which already houses a number of orangutans.