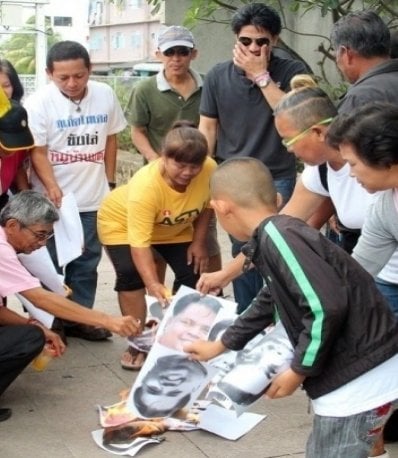 PHUKET: A small group of protesters turned out at Queen Sirikit Park in Phuket Town yesterday to burn images of key local red-shirt leaders in protest of an anticipated official opening of a Red Shirt Village in Phuket.

“Our protest was organized after we heard the news that the red shirts planned to announce the ‘opening’ of a Red Shirt Village in Phuket Town at 10am today,” said protest leader Krit Thepbumroong.

“The official opening was to be led by Prasong Boonpong, a former Minister of Labor and Social Welfare who is currently chief adviser of the Confederation of Red-Shirt Villages for Democracy of Thailand,” Mr Krit added.

The protest leader explained that the assembly at Queen Sirikit Park, a combination of members from Phuket Model Group and the Kon Phuket (“Phuket People”) movement, began at 8am, with supporters ready to be deployed to other areas in Phuket if a Red Shirt Village was announced.

However, Mr Krit admitted, “We have yet to hear the exact locations where it will happen.”

The protest at Queen Sirikit Park in the heart of Phuket Town yesterday followed Kon Phuket members assembling at Saphan Hin on Saturday to burn caskets and mock posters announcing of the establishment of Red Shirt Villages in Phuket.

Asked about the grave actions of burning coffins and the treading on and setting alight posters of people’s faces, Mr Krit said, “The burning of the images is to symbolize that we don’t want any Red Shirt Villages anywhere in Phuket.”

The Red Shirt Village program has had limited success in Southern Thailand, including Phuket, which is openly considered the heartland of Democrat supporters.