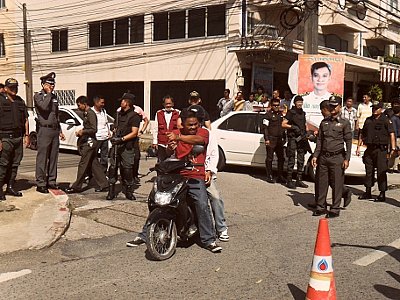 PHUKET: Police today staged a re-enactment of the assassination of Phuket reporter Wisut “Ae Inside” Tangwitthayaporn, who was shot dead amid rush-hour morning traffic last Thursday.

Heavily-armed members of the Phuket City Police and the Phuket Special Operations Unit escorted the alleged driver in the attack, 43-year-old Noppadol “Pae” Praisri, through the events that led to the ambush of Mr Wisut.

Phuket City Deputy Superintendent Lt Col Jaran Boonsopab told the Phuket Gazette that, “We have many armed officers at the re-enactment today to make sure that anyone thinking of harming Noppadol would know that we were ready to protect him.”

Phuket Police earlier told the media that Mr Noppadol had confessed to his role in the killing shortly after his arrest in his native Petchaburi province.

In a press conference at Phuket City Police Station yesterday, however, the suspect told the media that he “had nothing whatsoever to do” with the killing of Mr Wisut.

However, that fact did little to stop Mr Noppadol today from re-enacting in great detail how he and his alleged accomplice pulled off the crime.

They waited in ambush for Mr Wisut and his wife to emerge from their home in the Sri Suchart Grand View housing estate and shot him dead as he sat in his car at the corner of a side street and Thepkrasattri Road about a kilometer north of the Super Cheap retail complex.

The re-enactment also included visits to Mr Wisut’s home and a nearby vacant lot, where the handcuffed Mr Pae showed how he smoked a cigarette with the gunman while waiting for Mr Wisut’s Honda Jazz to pass.

After shooting Mr Wisut, Mr Noppadol drove south down Thepkrasattri Road against the flow of traffic with the gunman riding pillion, then crossed over at the Tantalum Intersection and continued south toward Koh Sireh.

When they reached the housing compound for government officers working in the office of the Rubber Replanting Aid Fund, near the Monkey Viewpoint, the pair painted the motorbike and changed their clothes.

From there they headed to Nimit Circle in Phuket Town for a rendezvous with their paymaster, a man so far identified only as “Mr Boy”.

They each accepted their agreed payment – with Noppadol receiving 50,000 baht – before leaving the island.

The investigation continues with police trying to track down the the alleged gunman, identified as 41-year-old Sanya Klinchum, as well as “Mr Boy”.

Meanwhile, there have been rumors of supernatural activity related to the murder among Phuket reporters, who have clearly been shaken by it.

Mr Wisut’s widow, unable to stay alone in the house they shared, has been sleeping at the home of the president of the Phuket Reporters Club. The president’s wife said she experienced what felt like a cold, lifeless hand brush her leg as she slept.

Mr Wisut’s body remains at Kajornrangsan Temple on Ranong Road in Phuket Town. It will be transferred to Wat Kosit for a cremation ceremony scheduled for noon on Thursday.

New 50-baht banknote in Phuket by this weekend