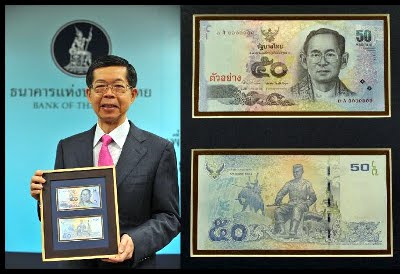 PHUKET: Phuket residents will have to wait until tomorrow or Friday before they can get their hands on the new 50-baht banknotes released nationwide today.

The new-look 50-baht notes, announced by Bank of Thailand Governor Dr Prasarn Trairatvorakul last week, will not be available in Phuket until tomorrow at the earliest, banks on the island have told the Phuket Gazette.

The new banknotes – dubbed Series 16 – will retain the sizes and colors of the current series.

Although the new notes will be in circulation, the older series banknotes will remain legal tender.

“The new 50-baht note should replace the 190 million old notes currently in use and more could be issued in response to growing popularity among the public and economic expansion,” Dr Prasarn said.

One of the new 50-baht note’s key features, which will be difficult to copy, is a watermark depicting the portrait of HM King Bhumibol Adulyadej. The watermark appears alongside the figure 50 and is clearly visible when viewed against the light.

Another feature is the security thread. The stitch-like line running vertically down the back of the note changes color from dark blue to red when the note is tilted.

Security is further enhanced by the irregular shapes printed on both sides that, when held up to the light, superimpose to form the number 50.

To aid the visually impaired, above the relief printing of characters and numbers, two blue flowers in an oblique row are raised and form the number 5 in braille.

“The thinking behind the new look is to honor the Thai Kings of the Sukhothai, Ayutthaya, Thonburi and Rattanakosin periods, to visually improve and update the banknotes, to develop counterfeit-protection measures and to assist blind people dealing with the banknotes,” Dr Prasarn said.