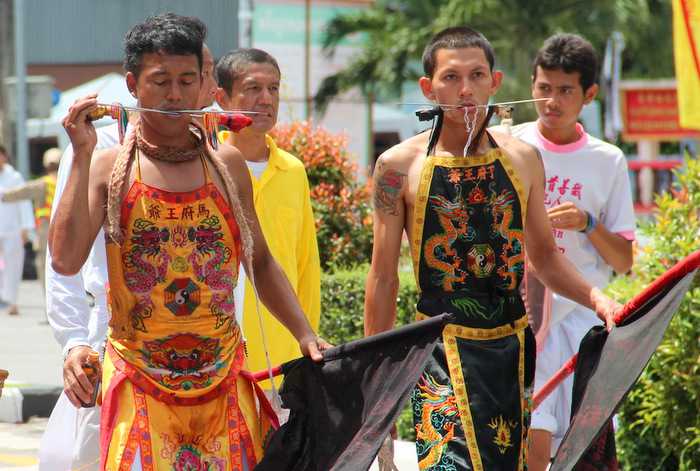 PHUKET: Tourists and island motorists were treated to the first street procession of this year’s Phuket Vegetarian Festival when devotees from the Choor Su Gong Naka Shrine south of Phuket Town marched to Saphan Hin this morning.

Scores of tourists and residents lined the streets, with many joining the procession along the way and motorists queuing up behind them waiting for the road to clear so they could move on.

The festival began on Tuesday evening when all Chinese shrines taking part in the event raised go-teng poles skyward so that the Jade Emperor, among the Nine Emperor gods, could descend from the heavens (story here).

For the full list of street possessions to be held across Phuket throughout the Vegetarian Festival, click here.

Throughout the festival, fireworks and drums are sounded, especially during ceremonies. It is believed that the louder they are, the better, because the noise drives away evil spirits.

Participants in the festival keep to a strict vegan diet for a varying number of days, usually no less than three. This they do to make themselves strong in mind and body; they refrain from all vice, eating animal flesh and killing animals. The festival thus promotes good hygiene, brightness and inner peace.

The 10 Rules for the Vegetarian Festival: