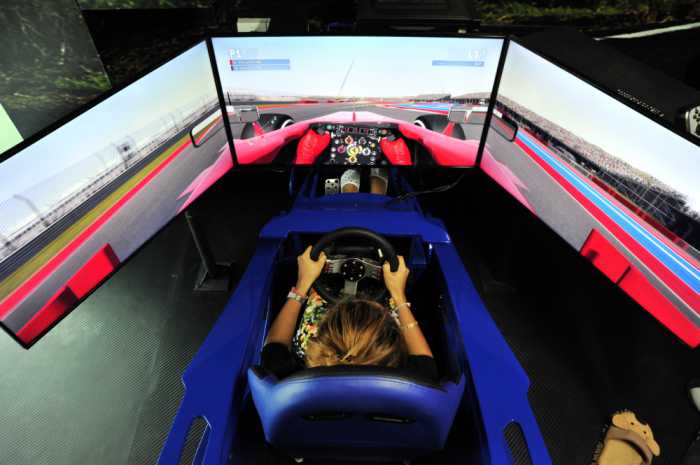 PHUKET: Grid Racing Phuket (GR Phuket) will become the first dedicated F1 racing simulator of its kind in Phuket when it opens its doors to the public on October 3.

Combining his past experience with simulators, Australian national Paul and his partner “Visa” decided to capitalize on the rising popularity of the racing simulator industry and open their own “race space” in Patong.

“I ran a flight simulator in Australia and I sold part of that. I was then looking around for something to help out my Thai partner here in Phuket and to invest in, maybe another flight simulator here or in the US.

“We came up with the idea and looked at doing it in the Philippines first, but we decided, because of the time that I spent here, that Thailand was much more stable and much more tourist-friendly with much less government regulation,” said Mr Bushell.

Although flight simulator businesses, like the one Mr Bushell built and sold in Perth, garner plenty of attention, group participation is limited. This realization helped turn his attention to the multi-player experience that Formula One racing simulators offer.

“Here, you’ve got a lot of tourists… looking for things to do.”

Despite a variety of commercial simulators on the market, Mr Bushell decided to apply his background and expertise in mechanical and network systems, and marine electronics in the design and construction of the simulators himself with help from his partner.

“We’ve tried to keep everything locally built in Thailand so that if we do expand, we can do it with local support,” he said.

“The thing you get by setting it up yourself is that if it stuffs up, you can fix it, because you know what goes wrong and what happened to it.”

Visa with her team of 10 employees and Paul’s support have created a vibrant atmosphere with walls covered in F1 race cars, a bar that belongs at the track and multiple televisions showing recent Grand Prix’s to get racers’ motors running.

Up to eight participants can race head-to-head against each other and choose from all of last year’s F1 cars and about 60 different tracks. It requires near superhuman skills to pilot an F1 car, and for those who lack the dexterity to command one (i.e. most of us), a range of assists are available to make the experience less daunting.

A vast array of settings can be adjusted to customize the cars and the simulator experience – many of which only the most knowledgeable fans will understand.

Mr Bushell explained that other options such as off-road rally racing, Nascar and street circuits will be added in the near future.

Although the business model has a strong emphasis on bringing in tourists, they haven’t forgotten the locals.

“A lot of stuff is priced just for tourists and doesn’t cater to the local market. If you want them [the locals] to use it in the club situation, you’re going to have to price it accordingly so they can afford to do so and come in to have a bit of fun,” he said.

GR Phuket will be offering club memberships that will give members steeply discounted rates during off-peak hours when simulators are not in use. Club members will get other preferential treatment such as discount drinks at the bar, coffee and hot food.

GR Racing has several mobile simulators for rent, which can be delivered to special events, and purchase options are also available.