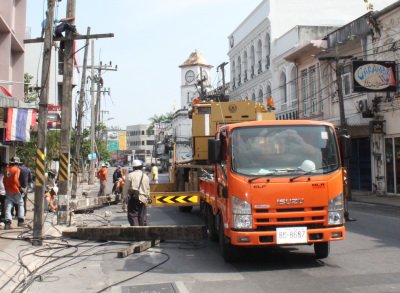 The Provincial Electricity Authority (PEA) has already finished burying the electricity mains cable on Krabi and Deebuk Roads. They are now focused on burying the mains supply along sections of Thepkrasattri and Phuket Roads, after which the obsolete concrete poles will be removed and the roads resurfaced.

“The PEA has just removed the power poles on the left side of Thepkrasattri Road, but the main power poles haven’t been removed yet… As soon as The PEA finishes their work, we can start paving the road,” explained Mayor Somjai.

Once phase two of the plan is completed, the PEA will begin burying the mains along Yaowarat Road.

“We have already improved the scenery on many of Phuket Town’s roads: Thalang Road, Soi Rommanee, Krabi Road, Deebuk Road. Soon Thepkrasattri Road and sections of Phuket Road will be improved too. As soon as the whole project is done, Phuket Old Town will look more beautiful and will attract more tourists,” said Mayor Somjai.

The project to bury the electricity supply in Phuket Old Town is jointly funded by the PEA and the Phuket City Municipality.