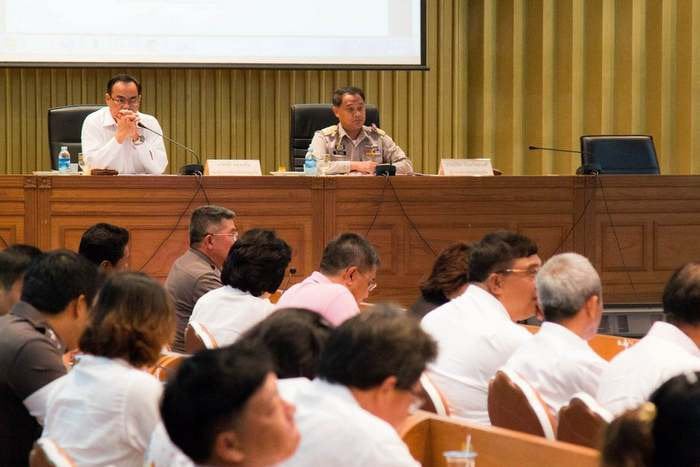 PHUKET: Plans for Phuket’s light-rail project are going full steam ahead, with changes to the train’s route and adjustments to traffic directions in Phuket Town being the focus of the latest meeting for the 23.5-billion-baht venture.

The proposal for the project to run through town was made in May of last year (story here).

“We are now drawing up more detailed plans for the project, especially for the stops in Phuket Town. There will be 20 stations and the route will be on the ground, except for the part which goes over the bridge from Phuket to Phang Nga,” said Sirigate Apirat of the Office of Transport and Traffic Policy and Planning.

“We have changed the route so that it crosses over Srisoonthorn Bridge rather than Thepkrasattri Bridge, as Srisoonthorn is newer and stronger.”

Traffic flow in Phuket Town will be changed to coincide with the route of the light rail, Mr Sirigate confirmed at the meeting at Provincial Hall on June 2.

“We will also make the sections of Thalang Road and Phang Nga Road that are between Phuket Road and Montri Road one-way streets, from west to east.”

Before these plans are sent to the Office of Natural Resources and Environment Policy and initiating an Environmental Impact Assessment (EIA), which officials expect to happen next month, Governor Nisit Jansomwong has urged experts to study the area extensively so as to mitigate any negative affects on motorists.

“Experts from the Office of Transport and Traffic Policy must study the roads thoroughly and consult with Phuket City Municipality and Phuket Provincial Police as soon as possible. We need to make sure that we have accurate information about driving activity in that area,” he said.

“Motorists’ normal driving habits will have to change when we alter traffic flow. We must do this in a way that affects their daily lives as little as possible.

“This is a massive, expensive project and we do not want any negative affects to come out of it.”

Human trafficking “caretaker’ turns himself in