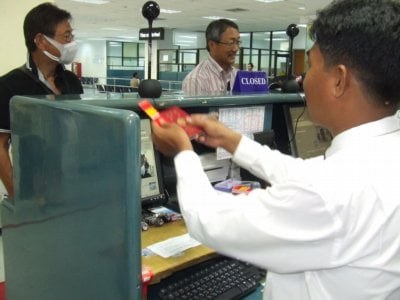 PHUKET: Foreign tourists arriving at Phuket International Airport (PIA) are being introduced to their ‘first friend’ on the island, the Tourist Police, with the distribution of bookmarks displaying important telephone numbers, including that of the Tourist Police hotline.

The nationwide public relations campaign, titled ‘Your First Friend’, was launched by the Tourist Police last month with the aim of putting a friendly face on the Tourist Police and to encourage tourists to contact them if they encounter any problems.

The Tourist Police hotline number 1155 is prominently displayed on the bright red bookmarks handed out at the airport immigration counters. Other important numbers on the bookmarks include emergency services, a TAT hotline, hospitals, airports, the State Railway of Thailand and taxi services.

The campaign was first launched on September 4 at Bangkok’s Suvarnabhumi Airport and then at PIA on September 29. About 3,000 bookmarks have already been distributed at PIA. It is expected that more than 100,000 bookmarks will be given out in Phuket during the first six months of the campaign.

Phuket Tourist Police Superintendent Ekachai Pramanakul said the 1155 hotline gives tourists a single number to call when they have a question or a problem, no matter where they are in Thailand.

Col Ekachai said the campaign has made a difference as more tourists were now contacting the Tourist Police through the hotline.

“Most of the callers’ questions are general inquiries about tourist attractions and how to get to them, but people are welcome to call any time with any inquiry. If we can not help callers immediately, we will co-ordinate with agencies and organizations that can,” he said.